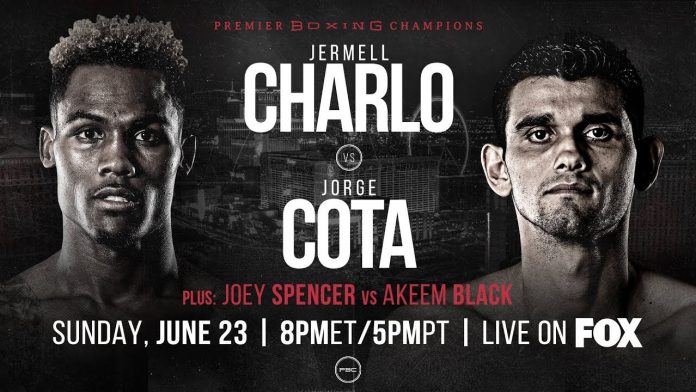 Jermell Charlo lost his WBC middleweight title belt last time out to Tony Harrison, and the duo was expected to face off in a highly-anticipated matchup on Sunday. However, Harrison pulled out of the fight, leaving Charlo to face a much less dangerous opponent.

Charlo instead will face off against journeyman Jorge Cota. This bout will no longer have the prestige of the planned one, and Charlo must guard against overconfidence. He is the superior fighter and Cota had to be ready on short notice, so everyone in the world knows this should be a lopsided fight.

As long as Charlo takes this bout seriously he should have little issue adding another knockout to his resume. Cota is going to need to plan the perfect fight in order to have a chance at pulling off this upset.

Charlo has a career record of 31-1 with 15 knockouts. He claimed the WBC light middleweight title in 2016 with a TKO of John Jackson. He successfully defended it three times with victories over Charles Hatley, Erickson Lubin and Austin Trout. Charlo faced off against Harrison in December with the belt on the line and fell via unanimous decision. Charlo was ready to reclaim his title until Harrison pulled out of this fight and subsequently underwent surgery for an ankle injury.

Charlo is one of the better boxers at the light middleweight class and at 29 years old is in the midst of his prime. Something crazy would need to happen for Cota to knock him off.

Cota has a career record of 28-3 with 25 knockouts. While those numbers are solid, the competition he has faced has not been near what he will see in the ring against Charlo. Cota originally made a name for himself in 2011 with a win over Yori Boy Campas, but then was beaten handily by Marco Antonio Rubio. Cota lost via fourth-round knockout to Lubin earlier in his career, a boxer that Charlo knocked out in the first round.

That gives an idea about the gulf of talent between these fighters, as Charlo has long shown off the superior ability.

He lost his belt to #tonyharrison who’s recently picked up an injury during training camp after a scheduled rematch with Charlo. @twincharlo new opponent is Jorge Costa pic.twitter.com/SbVeyO0Gcc

The only person that can beat Charlo in this fight is himself. Cota doesn’t stand much of a chance if Charlo is dialed in and ready to dominate. However, there is human nature at play here as he was amped up and ready for a rematch with Harrison.

Charlo is obviously the big-time favorite in this showdown and he is almost certainly going to win this fight. However, at lopsided odds, it makes more sense to take a lottery ticket on Cota, who does have some strength and maybe can stun Charlo if he is overlooked.

The odds aren’t out quite yet but rest assured that Charlo is going to be the comfortable favorite. It isn’t going to be worth it to back him because the payout won’t be very impressive. Live on the edge in this fight as Cota aims to pull the stunner and put some serious money in the pockets of his backers.

Check out the latest boxing odds for upcoming fights.