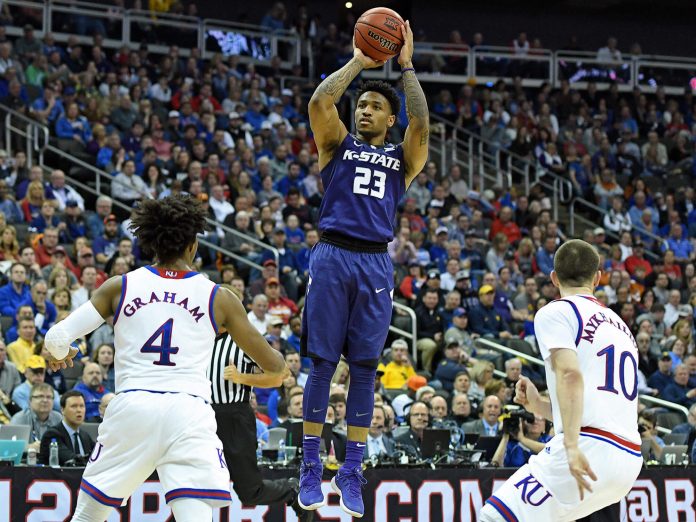 There’s still a chance the Kansas Jayhawks can keep their string of Big 12 regular season titles intact. But the chore became a lot more difficult after Saturday’s blowout loss to Texas Tech. The road hasn’t been good to the Jayhawks and they’ll use a loss earlier this season at Kansas State as a motivator when the two meet inside Allen Fieldhouse on Monday. As poor as they’ve played on the road, the Jayhawks have made up for it at home winning 18 in a row.

The first place Wildcats can guarantee that Kansas will finish no better than them with a victory. But wins have been hard to come by in the Phog. K-State hasn’t won in Lawrence since 2006. Kansas may be ripe for a takedown, but the Wildcats will have to perform at a high level.

Kansas State is riding a two-game winning streak into this matchup, blasting West Virginia and Oklahoma State following a loss to Iowa State. And they have a win over KU earlier this month. That was on the Wildcats’ home floor and things are drastically different when State visits its rival. The Wildcats haven’t won in Lawrence since 2006 and they are considered the ugly step-child to their in-state foe.

In order to claim a 15th consecutive Big 12 regular season title, the Jayhawks must bounce back from the worst conference loss in the Bill Self era. Kansas did nothing right in the 91-62 setback to the league’s second-best team. At least the Jayhawks get a chance to keep their streak alive on their home floor where they are 15-0 this season and have won 18 straight overall. That’s enough to make the Jayhawks a 3.5-point favorite on the opening college basketball line.

The loss of Udoka Azubuike to a hand injury last month and the leave of absence taken by Lagerald Vick has left the Jayhawks shorthanded. The roster has talent but is very young, and Self has had to do something he rarely does – start four freshmen. The lineup worked initially with KU rattling off three straight wins. But the youngsters had a hard time on Saturday with none of them able to score double figures.

And the calming influence of Vick along with the presence of Azubuike left a gaping hole in the Jayhawks lineup that was exposed by the Red Raiders. Devon Dotson, the team’s second-leading active scorer, managed only seven points at Texas Tech, and Ochai Agbaji tallied just two points. They, along with Dedric Lawson, are the only double-figure scorers on the team.

Combined the Jayhawks are missing 27.5 points per game with Vick and Azubuike out of the lineup, and that kind of production is hard to replace.

A pair of Big 12 player of the year candidates will carry their respective clubs into this tussle. Lawson has been a stud all season, but has assumed more responsibility with the losses of Azubuike and Vick. The junior hasn’t backed down and continues to produce with a young lineup around him. Lawson was the only Jayhawk to score in double figures on Saturday and he leads the conference with 19.0 points and 10.1 rebounds per game.

The Wildcats are more experienced with three seniors and two juniors starting. The group is led by Barry Brown, who scores a team-best 15.7 points per outing while his 2.0 steals per game aid a stingy defense that surrenders fewer than 60 points per game on average.

Lawson scored 18 points in the first meeting, but it was Brown and his defensive prowess that stole the show. The Wildcats forced 23 KU turnovers and were plus-10 in the second half to pull away for the 74-67 victory.

The Jayhawks are a completely different team at the Phog and State’s problems there have gotten into their head. However, with a chance to put a dagger in KU’s title hopes, the Wildcats will come out strong. And they have the best defense in the Big 12, which will make points hard to come by. This one will be close and I like the visitors to end their frustration in Lawrence. Take K-State and the points for a winner on the college basketball betting line.