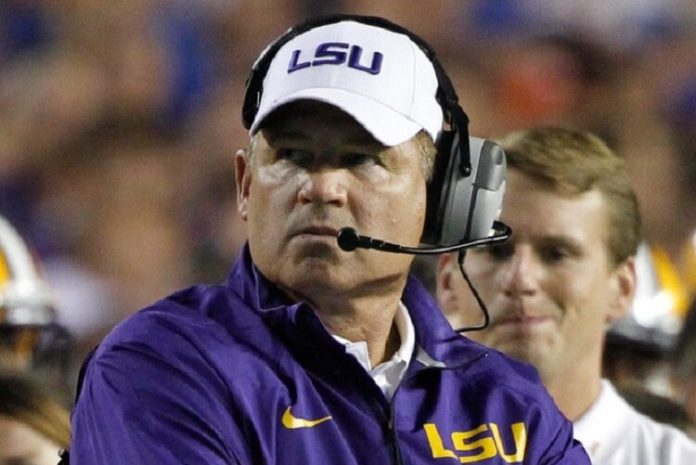 Les Miles wasn’t quite the first head coach in the ranks of the FBS to be fired during the 2016 regular season, but he was only a few hours short of it.

The LSU Tigers have decided to go a different direction after flirting with the idea of getting rid of “The Hat” for almost a full calendar year. Ed Orgeron will take over for the rest of this season, but already, the question is out there as to who will take over one of the Top 10 football jobs in America in 2017.

College Football Odds to Coach the LSU Tigers in 2017

Logically speaking, there are only two coaches who make any sense for the Bayou Bengals at this point.

Herman is the odds-on favorite in the college football betting odds for coaching. He opened up at +100 and has already moved to -115 to be the next coach of the Bayou Bengals. He’s the hottest coaching name in the ranks of the Group of Five teams after leading Houston to a Chick-Fil-A Peach Bowl victory last year over Florida State and opening up this season with a win over Oklahoma at NRG Stadium.

LSU has already made it clear that it will open up the purse strings as far as they need to be opened in order to land the coach that they want. If Herman really is going to command Top 5 money in the coaching world next year, there are only so many schools who can pay him that type of coin, and the only one with an imminent job opening is LSU.

Where this gets really interesting is if Herman decides he wants to continue to wait for the job he ultimately wants, that of Texas, or if the Longhorns decide to part ways with Charlie Strong after this season. Texas has an even deeper pocketbook than LSU has, and if Herman wants to stay in the Lone Star State, that’s where he’s going to end up.

Plan B for the Tigers is clearly going to be Florida State’s Jimbo Fisher. Fisher has won the National Championship already in Tallahassee, and he really doesn’t have a heck of a lot else to prove. He’s long been tied to the job at LSU should it ever come open, but last year, when the rumor was out there that Fisher was going to be offered the job in Baton Rouge, he declined to talk about it publically and ultimately stayed in Tallahassee.

The fact of the matter is that Fisher has it significantly easier at Florida State than he would at LSU. The ACC is a much easier challenge than the SEC is year in and year out, and the facilities and resources at FSU are just as good as the ones at LSU. Furthermore, Fisher has a team that feels like it’s a year away from contending for another championship in Tallahassee. Would he have that at LSU, especially once Leonard Fournette goes on to the NFL? We’re not all that sure.

The list of other candidates is fairly thin at that point. Just as Orgeron was never really given a fair shot of keeping the job at USC after he took over as the interim coach for Steve Sarkisian last year, he won’t be keeping this job either. Kliff Kingsbury, Gary Patterson and Bobby Petrino are all hot coaching names, but none of them have ties to the SEC or the state of Louisiana for the most part.

Lane Kiffin is at least a remotely intriguing coach betting possibility. After years of coaching under Nick Saban at Alabama, Kiffin would love to get another shot at an SEC coaching gig. But after failing at both Tennessee and USC, is this the man LSU really wants to tie its ship to? Wouldn’t Miles have been a safer choice at that point?

And that leaves us with the field at +350. Not only are all of the names out there as possibilities in the ranks of college football, but there are names in the NFL as well who could ultimately take this job if all goes south with both Herman and Fisher.

And would it really be that out of the question to see an established name who seems content at his current job like Jim Harbaugh or Mike Dantonio coming to the Bayou if the price was right? The possibilities are just about endless, but one thing is for sure, and that’s that LSU is going to pay big bucks to get a man as high on its list as possible.

For more college football betting tips, check out Sports Betting Tips: How to Get an Edge with Depth Charts.