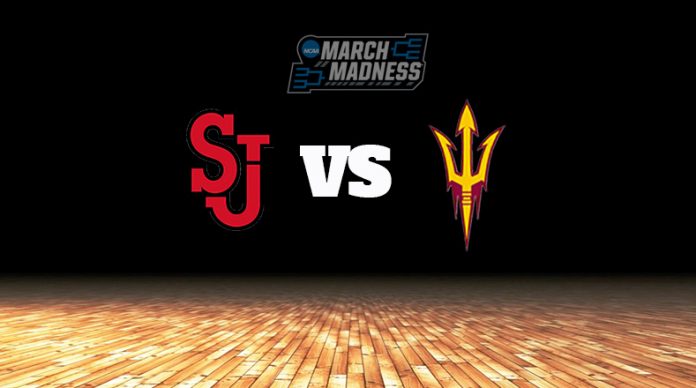 The Arizona State Sun Devils have been one of the most hot-and-cold teams in college basketball this season. They sneaked into the first four categorization of March Madness, and are hoping the dynamic part of the team shows up to help it make a Cinderella run. The Sun Devils have a tough opening matchup as they face off against the St. John’s Red Storm, with the winner claiming a spot in the field of 64.

The oddsmakers think this game is close to a pick ‘em, and it could be the type of contest that turns on one or two big shots down the stretch. The full slate of NCAA Tournament games doesn’t begin until Thursday but this is a nice appetizer beforehand.

Arizona State finished the regular season with a 22-10 record. The Sun Devils finished in second place in the Pac-12 tournament, which would usually be plenty to get the team safely in the Big Dance, but the conference really struggled this year, which made the Devils sneak in. Arizona State has won six of its past eight games heading into this matchup.

St. John’s is 21-12 on the year. The Red Storm went 8-10 in the Big East and struggled badly down the stretch, losing four of its final five games, and all by nine points or more. St. John’s is battle-tested because its schedule was tough, and it is hoping March Madness helps wipe the slate clean after the recent issues.

Arizona State point guard Remy Martin suffered a groin injury in the team’s Pac-12 conference semifinal loss to Oregon. Martin left the game for a stretch and eventually did return, but clearly was not at full strength. He seems likely to play, but if Martin is less than 100 percent it could have a real impact on this game.

He is one of the team’s best players, averaging 13.4 points, 5.1 assists and 1.3 steals per game. Martin is only a sophomore but he made the NCAA Tournament a year ago and has plenty of big-game experience. Keep an eye on any injury updates for him heading into the game.

St. John’s has several players capable of handling the scoring load, but when the pressure is on, the team will look to Ponds. The junior guard has had a tremendous career for St. John’s and is putting together another stellar season.

He is averaging 19.5 points, 5.2 assists and 4.2 rebounds per game. Ponds is shooting 45.5 percent from the field and 35.5 percent from three-point range, and the Sun Devils need to force him into contested shots to keep Ponds from taking over this game. Arizona State has some impressive individual defenders, and a player like freshman Luguentz Dort could get the assignment on Ponds. Dort will have to stay out of foul trouble or else Arizona State could be in a bind.

The Sun Devils have shown their high-end potential with wins over then-No. 1 Kansas and Pac-12 regular season champion Washington, but they also have some head-scratching losses. St. John’s played in a much tougher conference so it will be ready to go in this one, but look for Arizona State to put it together and come away with a tight win. The spread may not be more than a bucket in either direction, so the Sun Devils are the pick to cover.