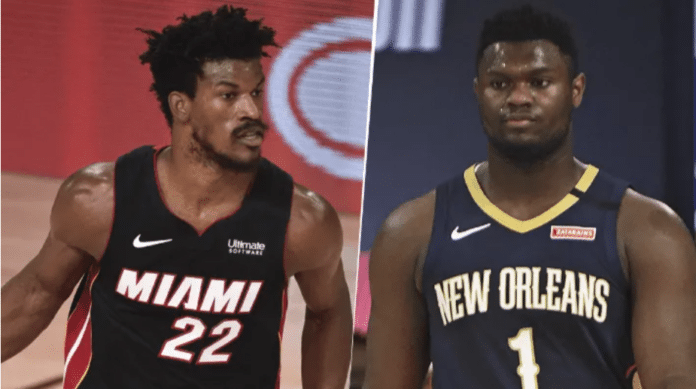 The Miami Heat and New Orleans Pelicans look to close out the first half of the NBA schedule on a high note when they square off on Thursday before the league shuts down for its All-Star game. Miami had won six in a row to move back to .500 before having the skid snapped by Atlanta last time out. The Pels meanwhile are coming off their biggest win of the season taking down the league best Jazz on Monday night. Could that be what sparks the young Pels going forward?

Thursday’s game will air live on TNT with tip off at 8:30 p.m. ET from Smoothie King Center in New Orleans. BookMaker.eu will have betting options for every game on the NBA schedule.

The Heat may not have been ready for what was coming their way. After reaching the NBA Finals last season knocking off the Bucks and Celtics to get there, they had a target on their backs. It didn’t help that COVID and injuries racked the roster earlier in the season. With things getting closer to normal the Heat are looking to close the first half on a positive note. They can get back to .500 with a win over the Pelicans, which is a spot that didn’t seem achievable so quickly just a few weeks ago. A loss to Golden State on Feb. 17 put them a season-high six games below .500 at 11-17. It took the Heat six games to get back to even for the first time since they were 4-4. Wins over the Lakers and Utah were among the streak that saw the Heat go 6-0 ATS.

It’s only one game, but a game it was for the Pels. And it’s not like the win came out of nowhere, it was just unexpected. Before knocking off Utah 129-124 on Monday, the Pels were involved in a few close games. They lost by four at Milwaukee covering the spread and fell by three points at San Antonio. Before that slide they had won two in a row setting a club record by coming back from 24-points down to beat Boston. But a lack of consistency has been a problem all season. Along with wins over Utah and Boston, the Pels also beat Milwaukee and Phoenix. But they’ve lost to Detroit and Minnesota, teams at the bottom of their respective divisions.

Just when it looked like the Heat were getting healthy and ready to go on a run, they lost Jimmy Butler to knee injury. Playing it safe for the second half, the Heat will probably sit Butler for Thursday’s tilt. He missed the last contests and not surprisingly their winning streak came to an end with an awful performance offensively. The Heat shot just 37.3 percent overall and was 9 of 33 from three-point range posting their lowest point total in a 94-80 setback to Atlanta.

Butler had a monster game in a win over Utah last week with 30 points, 10 rebounds and eight assists. Goran Dragic, who also missed a number of games with ankle problems, chipped in 26 points. There’s no question Butler is the leader of the team. He adds to the scoring line and plays strong defense, an area that showed the most improvement during the winning streak. If he sits the Heat are vulnerable.

The Pelicans are a fun team to watch if you like points. During the month of February they led the NBA in offensive efficiency posting 120 or more points in eight games. They were also last in defensive efficiency which led to a number of their problems. They were 7-8 SU and ATS last month with the OVER going 12-3 in their 15 games. They were good enough on offense to build a big lead over Utah and bad enough on defense to nearly cough it up. They survived on Monday, but we’ve seen them lose some tough games over the course of the season.

Zion Williamson had 26 points, 10 rebounds and five assists against the Jazz with Brandon Ingram adding 26 and Lonzo Ball 24. As a team the Pels shot 56.5 percent and were 7 of 11 from three-point range, yet they nearly blew a 17-point lead. The game is never over until it’s over with this team.

Following their win over the Jazz, Williamson said the Pels are getting close to where they want to be. They certainly can fill it up, now if they can only stop opponents. They did come up with a few crucial stops at the end of the Utah game to preserve the win and defense has been a point of emphasis for some time. If the Heat elect to sit Butler, the points will have to come from elsewhere, and Miami just isn’t as good without Jimmy Buckets.