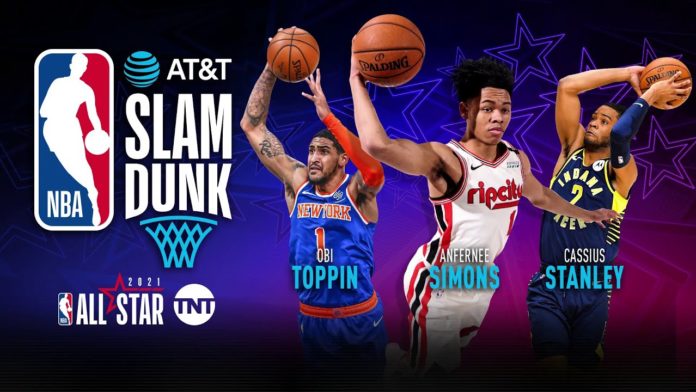 Three relative unknowns when it comes to the Slam Dunk Contest will hit the hardwood on Sunday. But that doesn’t mean we won’t be wowed by the trio as they show off their aerial artistry. Some feel the NBA All-Star’s showcase event has lost some of its magic. After all, how many ways can you dunk a basketball that we haven’t already seen in this competition? Don’t tell that to this year’s field, though. The players are out to create their own highlight dunks that have been immortalized by the likes of Dr. J, MJ and David “Skywalker” Thompson. Who knows, maybe this year’s winner will get a new nickname as well as the trophy.

All-Star festivities will air live on TNT starting at 6:30 p.m. ET on Sunday, March 7, 2021 from State Farm Arena in Atlanta. BookMaker.eu will have betting options for All-Star Sunday.

Changes to the All-Star Game format wiped out the weekend putting every event on Sunday. With a number of big name players questioning whether the game should even be held during a global pandemic, the Slam Dunk Contest got little response thus only three players will compete, the smallest field ever, with none having much NBA playing experience. Getting a chance to show off their mad hops is what drove the trio to participate.

The AT&T Slam Dunk Contest will take place at halftime of the 70th All-Star Game with a trio of high-flying youngsters competing. Maybe the new blood will breathe some fresh air into the event. The contest will consist of two rounds with each player getting two dunk attempts in the first round. The dunks will be scored from 6 to 10 with a maximum score of 50 and a minimum score of 30. The two highest scorers will then advance to the finals.

With time being a factor since the competition takes place at intermission of the All-Star Game, the final round will basically be a dunk off. Each player gets one crack with the judges selecting a winner by writing the players name on the scorecard.

The field of contestants for the Slam Dunk contest always provides fans with some of the most athletically gifted athletes the NBA has to offer. This year is no different. The future of the league is in good hands with the likes of rookies Toppin and Stanley, and third-year pro Simons ready to show off their aerial acrobatics on Sunday.

It’s an interesting field of players that hasn’t accomplished much in the NBA. But their careers before entering the NBA were outstanding. All are freakishly gifted athletes with Toppin the likely favorite when the odds hit the board.

The No. 8 overall pick in the 2020 draft, Toppin has delivered some highlight-reel dunks already this season. At 6-9 he’s drawn comparisons to former NBA great Amar’e Stoudemire, who competed in the 2003 and 2005 Slam Dunk Contests, though he never won. With his easy leaping ability and raw power, Toppin has an edge when it comes to specialized dunks. Last year at Dayton, Toppin led the nation in dunks and was voted the National Player of the Year.

Simons came to the NBA right out of high school where he was head and shoulders above everyone else, literally. Tape of his high school days shows him hitting his head on the rim during a dunk attempt. He posted a 41.5-inch vertical leap at the 2018 draft combine and has some pretty good mentors on the Blazers in Damian Lillard and last year’s champion Derrick Jones Jr.

Stanley is another player who can jump out of the gym. He recorded a 46.5-inch vertical leap during his season at Duke leapt 44-inches at the 2020 draft combine, the third-highest mark since 2000.

The younger generation of players tries to outdo everyone when it comes to dunking the basketball. All three participants certainly have what it takes to win and fans watching will be treated to some aerial acrobatics. In the end, though, Toppin has the frame and skills to compete with the best of them. And he must be feeling better in order to compete.