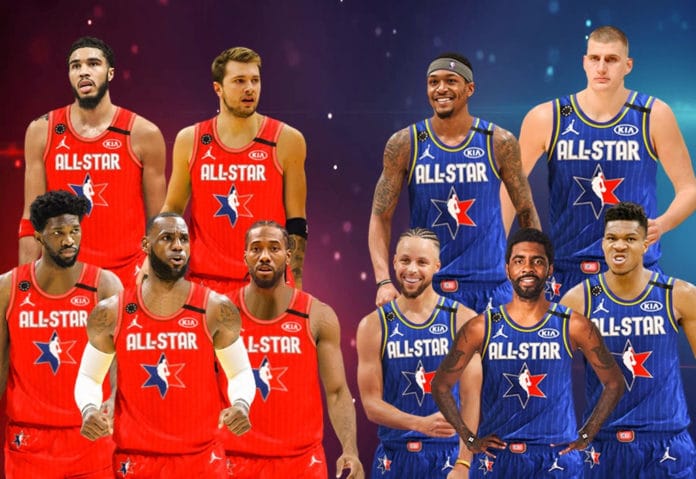 Recent changes to the NBA All-Star Game format has livened up the annual showcase of top talent. For the fourth straight year team captains drafted their roster from the top vote getters around the league. And for the second consecutive season a revamped scoring system will be used. Team LeBron goes for another win taking on Team Durant in the 70th All-Star Game Sunday from Atlanta. With such a collection of talent it’s tough to pick a winner, but you can count on plenty of points being scored. Teams have combined for more than 300 points in six of the last seven NBA All-Star Games.

The NBA All-Star Game will air live on TNT with tip off at 8 p.m. ET on Sunday, March 7, 2021 from State Farm Arena in Atlanta, Georgia. BookMaker.eu will have betting options for All-Star Sunday.

Can you really pick a favorite in a game featuring so much talent spread among the teams? LeBron James has been a part of every game since the NBA ditched the old East vs. West format for the draft in 2018. Starters were voted in with the top vote getter from the East and the West serving as captains. James is back for a fourth season having picked correctly in each of the last three games.

Kevin Durant debuts as a captain and that’s all he’ll do. An injury has kept KD off the court for the last few weeks and he’ll skip the game. One thing that stuck out for James and his first two draft picks are the number of NBA MVP awards. Two-time reigning MVP Giannis Antetokounmpo was the first overall pick and two-time MVP Stephen Curry was the second. Combine those awards with LeBron’s four and the team has eight MVPs.

KD used his first pick on Brooklyn teammate Kyrie Irving and then selected James Harden with the first pick of the second round. The Big Three hasn’t played together much since the Nets acquired Harden and they won’t be on the floor together for the glorified exhibition. The trio has sparked a resurgence in Brooklyn with the Nets moving up the conference ladder. I guess KD was looking at familiarity being a big factor in his draft process. Team Durant has a good mix of size and scoring that will stress Team LeBron’s defense.

Like I said in the opener, you can probably flip a coin to pick a winner, though 3.5-points on the opening line is inviting. Two of the last three games have been decided by three points or fewer. Team LeBron won the 2018 edition by three points and eked out a 157-155 victory last year in the first game using the target score format. The same format is in effect this season. Here’s a quick refresher on how it works: The first three quarters are played as their own game. Starting at 0-0 the team with the most points wins that quarter. At the end of the third quarter the leading team gets 24 points added to its cumulative total to come up with the final target score. The 24 is in honor of the late Kobe Bryant.

With a collection of the best players on the planet and none of them playing defense, points have been plentiful in the All-Star Game. It’s always been a high scoring game, so don’t be surprised to see a total in the 300s. Six of the last seven All-Star Games have seen at least 300 points scored with a whopping 374 combined points in the 2017 game. The teams combined for 312 points last year under the target scoring format.

Each team has five of the top-10 scorers in the league with Team Durant boasting the top two. Bradley Beal leads the league with 32.9 points per game with Joel Embiid second at 30.2. They are the only players to average more than 30 points.

Best Bet: Team LeBron -3.5 and the UNDER

I predict a lot of points being scored. Unfortunately oddsmakers have adjusted their numbers making it more difficult to cash a ticket on the OVER. And the new scoring format provides challenges. You can bet the teams will score more than 24 points if a full 12 minutes is played. The scoring format throws a wrench in the plans to play over the total. I do like LeBron’s starting lineup with Curry and Giannis, then add Luka Doncic to the mix and that squad looks unstoppable. It just depends on how long they play.