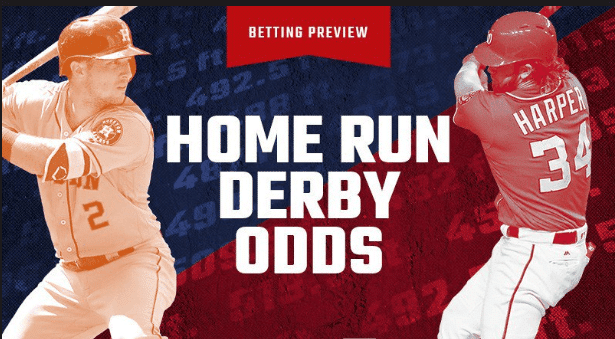 Hometown favorite Bryce Harper of the Washington Nationals is the only one among the eight-player field with any Home Run Derby experience. While his batting average is down this season, his power numbers are just fine, and Harper comes off as the betting favorite at +309 to win the 2018 Home Run Derby. The derby takes place from Nationals Park on Monday, July 16 starting at 8 p.m. ET. The event will be televised on ESPN.

Harper has the advantage of playing in his own yard, however, more than half of his 23 homers this season have come on the road. And it’s a good thing this isn’t the singles derby since nearly 33 percent of his hits have left the yard. Milwaukee’s Jesus Aguilar has the most homers of any player in the field with 24 and he comes off as the second favorite at +392.

Aguilar is the top-seed in the event and will compete against Philadelphia’s Rhys Hoskins in the first round of the bracket style event. Harper, the No. 2 seed, will square off with Atlanta’s Freddie Freeman. The other matchups have Houston’s Alex Bregman against the Cubs’ Kyle Schwarber while L.A.’s Max Muncy and Javier Baez go at it.

The only player with Derby experience, Harper will be fueled by the hometown fans. But it hasn’t been the best season for Bryce, who enters with a .214 batting average. He does have 23 homers, the second-highest total of any participant, with 11 coming at Nationals Park. Harper was runner-up at the 2013 Derby, belting 24 homers in three rounds at Citi Field. He came up short of the crown falling to Yoenis Cespedes in the finals. Harper has struggled in his walk year and his pressing is playing games with his head. He’ll try and crush everything out of the yard in order to impress the home fans, and that will lead to an early exit.

Muncy has resurrected his career with the Dodgers and he became the fastest to hit 20 homers in a season in franchise history. Picked off the scrap heap before the season, Muncy cracked his 20th home run in his 183rd at-bat. He entered the break with 22 homers for the season in a surprising display of power. Muncy entered the year with just five home runs in 215 at-bats over his first two seasons in the Majors. Given his past numbers it’s hard to classify him as a power hitter right now.

Putting together an MVP-type season for the Brewers, Aguilar enters the Derby with the most home runs among the participants. His 24 dingers are eight more than he had all of last season after not hitting a homer in his first three seasons with Cleveland. Call Aguilar a late bloomer since he is the oldest player competing. But he’s also among the hottest entering the competition and he feels as though he has something to prove.

Not an overwhelming underdog but there is plenty of value in taking Schwarber. The sweet-swinging lefty has the perfect approach to the Derby and that will serve him well in the competition. He clubbed his 18th homer of the season on Saturday before taking Sunday off with a lefty on the hill, though he did get a pinch-hitting assignment. Schwarber says his batting practice routine consists of a couple of rounds where he literally swings for the fences. That approach has increased his stamina and could be what proves the difference.