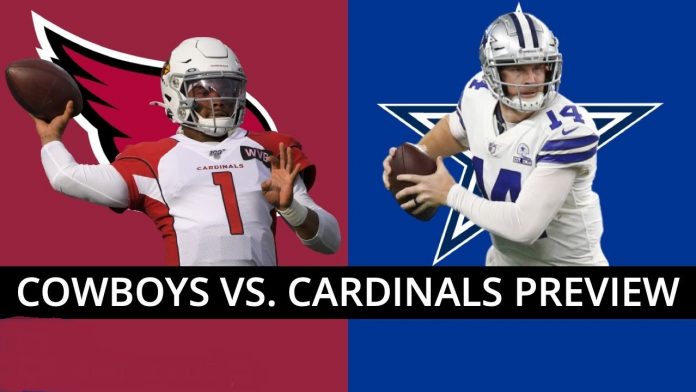 At the moment that the Dallas Cowboys announced the hiring of head coach Mike McCarthy they were touted as a Super Bowl threat.  McCarthy had the coaching credibility of a Super Bowl championship with the Green Bay Packers although he also had NFL betting baggage of not winning more hardware with Aaron Rodgers and before that Brett Favre.  McCarthy has quickly seen his Cowboys honeymoon end.  In fact, he has alarmed fans and gamblers thus far at Dallas.  His reckless gambling has contributed to losses.  Along the same lines there have there been some bizarre play calling issues that have made fans scratch their heads.  Worst of all is a serious lack of complimentary football.  Dallas has one of the NFL’s worst defenses after one month of play.  The Cowboys did boast the best passing attack in football before quarterback Dak Prescott was lost for the rest of the season last Sunday.  Monday night a well-balanced Arizona Cardinals team will come calling.

The Arizona Cardinals being a road favorite and chalk to Dallas is rare indeed.  Yet a deeper dive shows it’s perfectly understandable.  Public betting equations here are easy to comprehend.  Arizona has a highly productive offense going up against the defenseless Cowboys. Dallas is consistently overpriced as “America’s Team” as their name brand popularity dominates the board.  Which means that sharps may now consider the Cowboys because the squares have abandoned them.  Further adding to this is the season injury to Dallas quarterback Dak Prescott.  Replacement Andy Dalton lacks public betting credibility although Dalton is a competent veteran that played well last week.

Arizona has an NFL odds record of 3-2 straight up and against the spread with all five of their games going under the total.  Arizona ranks 10th for total offense and 16th for scoring while on defense they have shown marked improvement to rank 10th overall and fifth for points allowed.

Last week the Cardinals beat the Jets 30-10 as 7-point road chalks as under the total of 48.5 paid too.  Quarterback Kyler Murray passed for 380 yards and a touchdown while wide receiver Deandre Hopkins had six catches for 131 yards and a TD.

Cowboys Must Tighten Defense for Dalton

Dallas has a pro football betting record 2-3 straight up but 0-5 against the spread with four of their games clearing the total.  Dallas ranks first in the NFL for overall offense and third for scoring.  With Dak Prescott they were top ranked passing team in pro football.  Of course, the big problem is a defense that ranks 27th overall and dead last for points allowed.  Only by default is Dallas the first-place team in the NFC East.

Dallas is coming off a 37-34 home win over the Giants as 7.5-point chalk as over the total of 52 payed too.  Of course, the season ending injury to Dak Prescott has brought despair to Big D.  Andy Dalton was solid in relief of Prescott on Sunday as he went 9 of 12 for 111 yards passing.  Dalton was a playoff quarterback with the Bengals several years ago.  So, there is legitimate hope that the Cowboys can still make the playoffs.

Cardinals at Cowboys Against the Spread

Dallas draws betting interest like no other NFL team which means that cash will flow into their Monday Night matchup with Arizona.  Presently the Cardinals are playing the superior brand of football.  But Dallas is a dangerous dog with eight payouts in their last 11 when getting points.  And the Cowboys handle the Cardinals consistently at home.  Andy Dalton adds to the Dallas contrarian take.