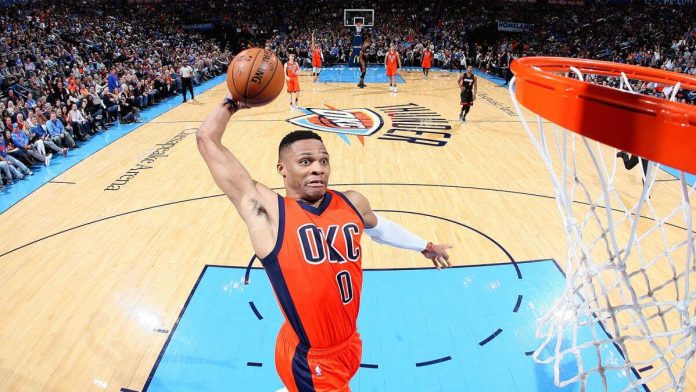 The triple-double is generally reserved for only the best and most dynamic players. Several incredible players in NBA history never had a triple-double, or them had them on ridiculously random occasions.

And that brings us to Russell Westbrook, a man on a mission with the Oklahoma City Thunder this season. Westbrook lost his longtime running mate in the Sooner State, Kevin Durant, to free agency in the offseason, and he’s taken it upon himself to will OKC to a 15-9 record through the first 24 games of the season. What does this mean for Westbrook’s NBA MVP odds?

Westbrook has been a freak this season, averaging 31.1 points, 11.0 assists and 10.9 rebounds per game. He’s not shooting the ball particularly well at just 42.8 percent and is turning the ball over 5.8 times per game.

It’s inarguable, however, that this team would be amongst the worst five or so in the NBA without him in the lineup. If nothing else, you know you’re getting a treat when you show up to the gym to watch Westbrook play on a nightly basis.

Westbrook posted seven straight games with a triple-double from the day after Thanksgiving through December 9, one shy of the NBA record held by His Airness, Michael Jordan. Just to be put in that type of rare air is an amazing accomplishment, and it’s at the point that BookMaker.eu has the 6-foot-3 point guard at -120 NBA odds to log a triple-double in Tuesday night’s game against Portland.

Should Westbrook really be an odds-on favorite to post a triple-double on a night in, night out basis? It’s hard to argue the point this year thus far, knowing that he has 12 triple-doubles in 24 games this season, and even on nights that the rest of the Thunder offense has been shut down, he’s still gotten his stats.

To put this in its proper perspective, there have only been 16 players in NBA history with more than 12 triple-doubles in a campaign. And in case you haven’t looked at a calendar yet, we’re still a couple weeks away from Christmas.

The record for triple-doubles in a season is 41, a mark held by Oscar Robertson from his amazing 1961-62 campaign. That year, he also averaged the elusive triple-double, posting 30.8 points, 12.5 boards and 11.4 assists per game.

What Oddsmakers Are Saying About NBA Props

BookMaker.eu has lined Westbrook at 35.5 triple-doubles for the season in its basketball betting odds, a mark that would easily eclipse Wilt Chamberlain’s 31, the second-most in a single season in NBA history from 1973-74. If you believe that Westbrook is going to keep up this pace and make a serious bid at Robertson’s record for triple-doubles in a season, you can have the over at a price of +105.

Think that Westbrook is going to average a triple-double this year? You can get paid off at a cool price of +202.

The fact of the matter though, is that Westbrook is going to have to work insanely hard to get there. The best bet, in fact, is probably if he gets injured, something that is always possible for a man averaging almost 36 minutes per game on the court.

But, as time goes on, it’s worth remembering that this is a man who didn’t average double-digits in assists in a season until last year, and that includes the 2014-15 season when Durant was hurt for large chunks of the season. Westbrook has also never averaged more than 7.8 rebounds per game.