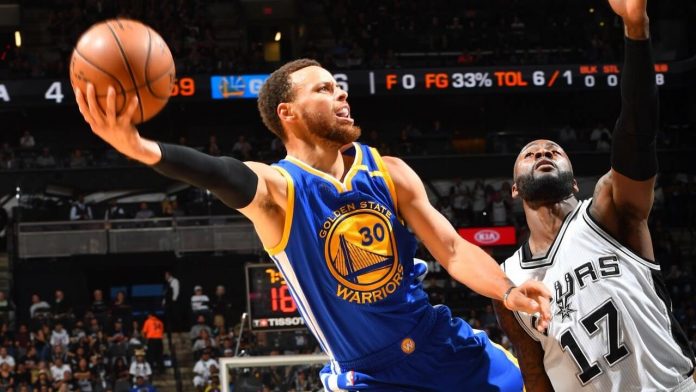 The Golden State Warriors and Houston Rockets entered the playoffs as the teams to beat in the NBA, and they have done nothing to change that thinking early on. Houston is cruising in its opening-round series while Golden State is on the precipice of a sweep of the San Antonio Spurs.

The Warriors can finish off their first round series on Sunday in a nationally televised affair. The Spurs are hoping to at least grab one win in front of their home fans but they are severely outmanned and it could be a tough thing to ask.

Golden State is on the road once again for this one but had no trouble in Game 3 and will be favored to pull off the sweep.

Game 4 of this NBA Playoff Series is on Sunday, April 22, 2018 at 3:30 p.m. ET at the AT&T Center in San Antonio, Texas. The contest will be nationally televised on ESPN.

The Warriors are listed as six-point favorites in Game 4 after dominating each of the first three games of this series. The betting public has jumped on Golden State. The Warriors have gotten nearly 89 percent of the action to cover the spread in the earlygoing.

The scoring total is listed at 203.5 points. Golden State is an elite scoring team but the Spurs have had trouble putting the ball in the net thus far, so the oddsmakers have split the difference with this number.

The moneyline has not yet been released but Golden State should be a solid favorite there while the Spurs will be the underdogs to pull off the upset.

Warriors star forward Kevin Durant rolled his ankle in the fourth quarter of Game 3 and didn’t return. Golden State cruised to the 110-97 victory but obviously this will be a big storyline if Durant’s availability for Game 4 is in doubt. The Warriors said the injury was minor, but more should be known in the coming days.

Durant seems likely to play in Game 4, but with such a commanding lead Golden State could opt to exercise some caution and keep him on the bench. Golden State is already missing Stephen Curry as he is trying to return next round from a sprained MCL. If both stars don’t play in Game 4, it would not be a surprise to see the Spurs listed as the favorites.

Warriors guard Shaun Livingston also sprained his ankle, which is a blow to Golden State’s depth if he has to sit for a while. Keep a close eye on the Durant and Livingston injuries when deciding on a wager for the Game 4 matchup.

Gregg Popovich was not with his team during Game 3 as he deals with the tragic death of his wife, Erin, who had dealt with a long illness. Popovich is one of the best coaches in the NBA and he has respect around the league. Several players and coaches from many different teams sent their condolences to Popovich and the Spurs during such a tough time.

It is unknown if Popovich plans to return to coach in Game 4. It would be completely understandable if he remained on the bereavement list and allowed assistant Ettore Messina to coach the team next time out during this difficult time.

If Durant doesn’t play then San Antonio should have a chance. However, he downplayed the ankle injury after the game and could be on track to play. Between Durant and Klay Thompson, the Warriors have a pair of stars that are tough to stop.

Take Golden State to win this game to wrap up the sweep of this first round series against the Spurs. However, San Antonio is the choice to cover.