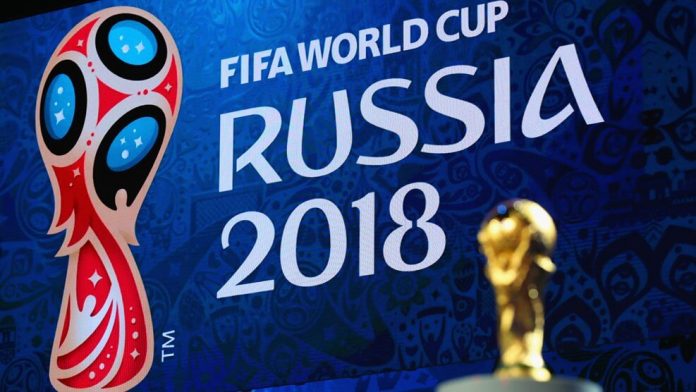 With the regional qualifying process and group system meaning that both footballing giants and minnows mix it in the World Cup, the tournament always throws up its fair share of surprise results. However, in the case of the 2018 FIFA World Cup, the shocks started happening as far back as 2017 during the qualifying rounds.

Among a number of fancied sides who did not make it to the Finals in Russia, the biggest upset of course has been the failure of Italy to qualify for the first since 1958. The search for reasons behind Italy’s disappointing qualification campaign has naturally led to a great deal of soul searching (not to mention a plethora of recriminations), with the four-times champions’ manager Giampiero Ventura being the first casualty. Debate in Italy is continuing over who should succeed him permanently, although Luigi Di Biagio has been appointed as caretaker in the interim.

However, Italy was not alone in not making it to Russia — the Netherlands, runners-up in 1974, 1978 and 2010, were the other high profile European casualty after a particularly lackluster qualifying campaign under Danny Blind, while USMNT, Chile, Ghana, Greece (winners of Euro 2004), Hungary and the Republic of Ireland were among the other countries who might have been expected to go the Finals but who didn’t ultimately make it.

So what has the impact of these sides not going to Russia been on the World Cup betting markets?

Brazil and Germany are the current outright favourites with most online sports books at a best price of 19-4, with France second favourite at 13-2, and Spain at odds of 7-1. Perhaps the biggest surprise in the early betting is the relatively generous odds being offered on Portugal, winner of Euro 2016, especially considering the record-breaking form that Cristiano Ronaldo has been in for Real Madrid.

Many of the online bookmakers on playright.co.uk offer Portugal to win at odds of 20-1. There are some outliers to this though, with Betway Sport’s odds pricing Portugal to win the World Cup at surprisingly long odds of 25-1. Although the Portuguese do rely excessively on Ronaldo, and their hopes rise and fall in line with him, the form he has been in this season (despite reaching the ripe old age of 33) means that 25-1 on his taking them all the way looks like a good value bet.

Other sides who are in the running according to the bookmakers include Argentina at 10-1 (two-time winners in 1978 and 1986), Belgium at 12-1, and England at odds of 18-1. Outside of these, no other sides are given much of a chance by the sports books — the hosts Russia are at 50-1, extremely long odds for a host nation, while Saudi Arabia and Panama are the rank outsiders, both at 2000-1.

In terms of which two countries will make the final, Brazil facing off against Germany is unsurprisingly the current favourite at 12-1, with a Germany/France final at 14-1 and Argentina coming up against Brazil quoted at 16-1.

One of the most popular betting markets in any World Cup is always top goalscorer, and at the tournament in Russia there will be a great array of international strikers on show. Argentina’s Barcelona star Lionel Messi is the current favourite at 10-1, followed by Brazil’s leading goalscorer Neymar (currently at PSG) at a best price of 12-1. There will also no doubt be significant money for England’s Tottenham striker Harry Kane, French playmaker Antoine Griezmann, and the evergreen Ronaldo, all three of whom are quoted at 16-1.

With the USMNT and Canada not qualifying for the Finals, Mexico are the hot favourites to finish the best of the North American CONCACAF countries at 1-2, although the market on the top South American team (CONMEBOL) is a little more tight. Brazil is favourite at even money, followed by Argentina at 19-10, Uruguay 15-2 and Columbia 8-1.

Japan is the team most favoured to be the best team from Asia (AFC) at odds of 7-4, followed by Australia at 3-1, South Korea at 7-2, and Iran at 4-1. The market on which African team (CAF) will finish the highest is also quite competitive, with Senegal the current favourites (2-1), followed by Nigeria at 9-4, and Egypt at 11-4, the latter largely on the back of their star striker Mohamed Salah, who is on target to be the Premier League’s top scorer for Liverpool this season.

The first of the tournament’s 64 matches kicks off in Moscow on 14 June with a Group A match between hosts Russia and Saudi Arabia, with the quarter finals (played between the winners and runners-up in the 8 groups) scheduled to take place on 6-7 July, followed by the semi-finals on 10-11 July. The 2018 World Cup Final will take place on 15 July at the Luzhniki Stadium in Moscow. 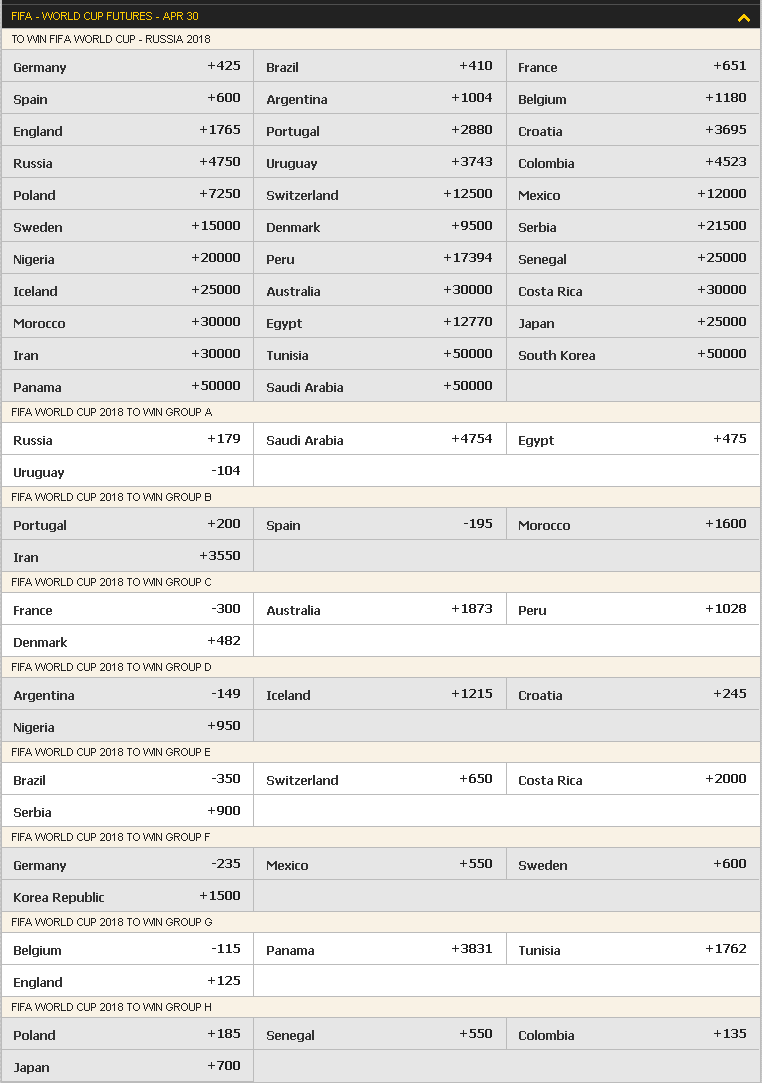