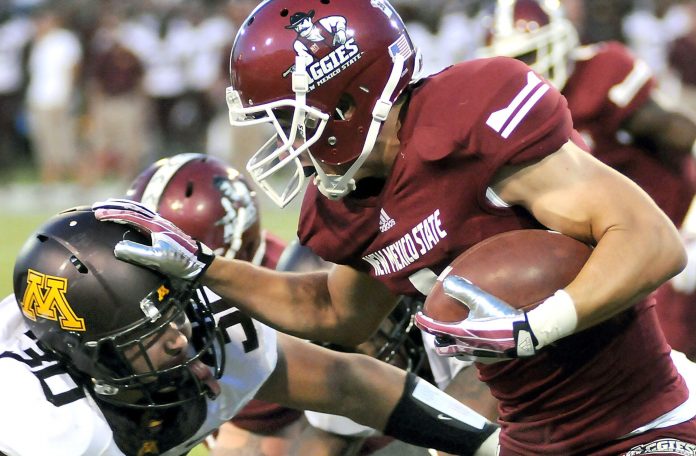 The New México State Aggies beat Utah State last season, breaking a 57-year bowl drought by advancing to the Arizona Bowl. They would love to make it back-to-back postseason berths with another appearance in 2018, and an upset victory over the Minnesota Gophers in the season opener would be a nice start.

New México State has some momentum but lost star receiver Jaleel Scott as well as three-year starting quarterback Tyler Rogers. The offense must prove it can move the ball against a big-conference foe. Minnesota finished under .500 a year ago and is aiming to make a bowl game this year. The Big Ten is loaded, so winning games like this is essential in that pursuit.

The Gophers are sizable favorites but don’t be surprised if the Aggies keep it much closer than advertised.

The New México State Aggies and Minnesota Gophers will face off on Thursday, August 30th, 2018 at 7 p.m. ET at TCF Bank Stadium in Minneapolis, Minnesota.

The line currently favors the Gophers by 20 points, and they are getting the majority of the action to cover. Minnesota is the -825 moneyline favorite, so it would be quite the upset if New México State came in and sneaked away with the victory. The Aggies will pay off at +700 for a win. While it’s not super likely, these are very solid odds for the underdog.

The junior college transfer, Matt Romero, is taking over the reins on offense for New México State. The dual-threat quarterback has talent but this is a tough start to the season. Minnesota should have the physicality edge and returns plenty of talent from a group that was solid a season ago.

The Aggies averaged nearly 30 points per game a season ago but that could be a tough task to duplicate against a significantly better team than they usually face. There are some good players returning, but the offensive expectations should be tempered considering the location, the strength of the foe, and Romero’s inexperience.

Minnesota vs New Mexico State – Who To Bet On

Minnesota should be able to win this game, but it’s going to be a little close for comfort. The Gophers’ offense could sputter early on which will allow New México State to remain competitive.

Take Minnesota to win on the moneyline but the spread is too high. New México State will cover the spread.