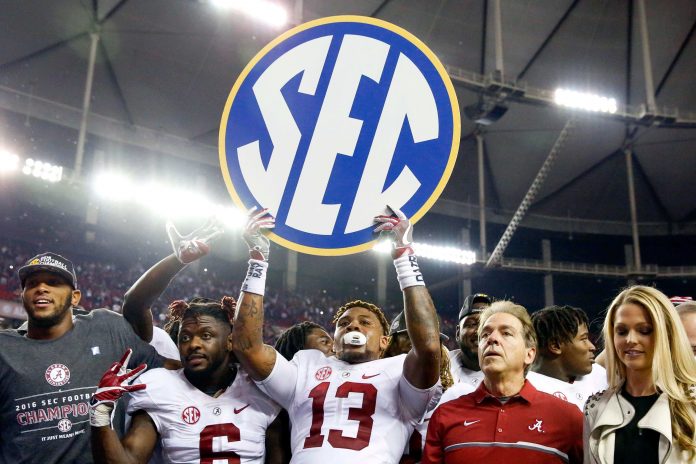 The Alabama Crimson Tide won another national championship a season ago despite missing out on the conference title and will be the team to beat in 2018.

The Crimson Tide can often survive a loss and still make it to the college football playoff, but that doesn’t always result in the SEC title. That’s why Alabama is the favorite this year but not an overwhelming one. The Georgia Bulldogs were the team atop the conference in 2017 when they knocked off the Auburn Tigers in the SEC title game.

Georgia and Alabama both made it to the college football playoff, and the Crimson Tide beat the Bulldogs for the national championship.

The Bulldogs have a lot of talent back and figure to be the main contender to Alabama. Quarterback Jake Fromm is a budding star and should keep the offense afloat despite the loss of the star running back duo of Nick Chubb and Sony Michel. Georgia’s defense lost Roquan Smith to the NFL but this is a team ready to compete for another championship.

Auburn makes up the third team in the troika of expected contenders. The Tigers may not be quite as talented as Alabama or Georgia, but if a few bounces go their way, they have the ability to be in the hunt.

Florida struggled a season ago but does have 19 starters returning. The offense needs to pick it up but this is the type of program that can jump back into contention quickly if things go right. Dan Mullen is in town as the new coach and would love to spark a massive turnaround right away.

Mississippi State and LSU have been contenders in past years but they are both underdogs to seriously compete with the best teams in the SEC. This is looking like a top-heavy conference, with Georgia and Alabama destined to duke it out for conference supremacy.

Odds To Win The SEC

Alabama is currently deciding between two impressive quarterbacks to start the year. Jalen Hurts has been under center the past two seasons but he was benched at halftime of the national championship game for Tua Tagovailoa. Tagovailoa responded by leading the Crimson Tide back for the victory over Georgia for the championship, which is why he is the favorite to win the job over Hurts. If so, Tagovailoa will be the favorite to win the Heisman Trophy, which says a lot about his natural ability.

Alabama lost star wide receiver Calvin Ridley to the NFL as well as some other key pieces on both sides of the ball, but returns a boatload of talent.

It’s an arms race as Georgia, too, is stocked with awesome athletes, as a bunch of players from these teams should make it to the NFL over the next few seasons. The Bulldogs have an impressive quarterback but Alabama is capable of shutting down anyone it faces.

There is a longshot that is worth a small wager in case things are turned on their head and they come away with the conference crown. The Missouri Tigers don’t have nearly the complete team like the best programs in the SEC but boast star quarterback Drew Lock. He is going to be a high draft pick in the NFL next season and would love to shock some dominant defenses through the air.

While the SEC has a handful of very good teams again this year, Alabama isn’t going to fall short in the conference for a second straight year. The Crimson Tide is the choice to win the SEC.