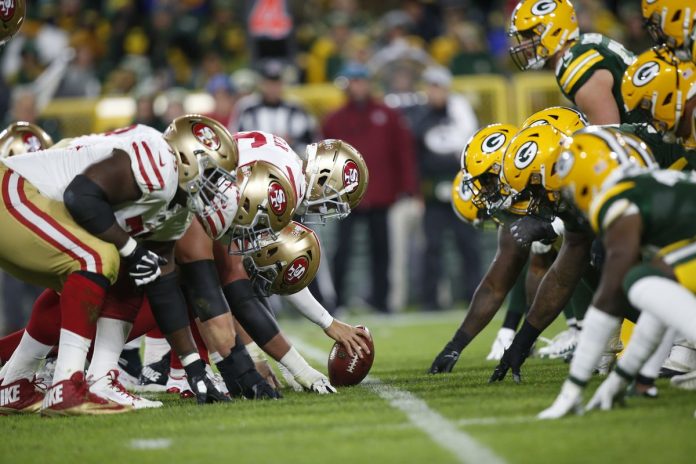 The San Francisco 49ers and Green Bay Packers are no strangers to this stage. San Francisco will be playing in its record 16th NFC Championship Game on Sunday when the 49ers host Green Bay in Levi’s Stadium.

This will be the 10th time that the 49ers have hosted a conference title game, but they have the worst winning percentage of any team that has hosted this game multiple times. San Francisco is under .500 at home in the NFC Championship Game with a 4-5 record, and Green Bay has won two of the five NFC Championship Games it has played on the road.

Titans vs. Chiefs
Packers vs. 49ers

One more win for a trip to the Super Bowl ? pic.twitter.com/3s4UkCcqdC

There was no question that the 49ers were the better team when these sides met earlier in the season. San Francisco pummeled Green Bay 37-8, holding the Packers to under 200 total yards of offense. Aaron Rodgers completed just 20 of 33 passes for 104 yards and a touchdown, and he was sacked five times. His longest pass completion was on a check down to Jamaal Williams, and the Packers can’t afford another dreadful performance on this side of the ball.

It wasn’t just the offense that struggled though. San Francisco ran at will with Raheem Mostert and Tevin Coleman leaning heavily on this defense as the 49ers averaged 5.1 YPC. That made life very easy for Jimmy Garoppolo, and he reaped the benefits on play action, completing 14 of 20 passes for 253 yards and two touchdowns.

San Francisco isn’t going to change anything with this game plan. The 49ers have had a lot of success running the ball in various formations under Kyle Shanahan, and they do a great job of taking advantage of tendencies. Mostert, Coleman, and Matt Breida all share the load to stay fresh, helping get the passing game going with their tough runs.

That enables Garoppolo to find his favorite target often, and Green Bay will need to figure out a way to stop George Kittle. Kittle caught six passes for 129 yards and a touchdown in the first meeting between these two teams. He is the best tight end in the NFL, and his skills as a run blocker are vital to what San Francisco wants to do on offense. Kittle will bury a defensive back at the line of scrimmage with his blocking, and that makes it very difficult for opposing defenses to cover him with a smaller player.

Deebo Samuel has come along nicely as a rookie, and he is a big, physical receive that can go up and make the tough catches. Emmanuel Sanders is a nice weapon in the passing game too since coming over from Denver, rounding out a very underrated offense.

Green Bay will need to get pressure on Garoppolo to win this game, and that means Za’Darius Smith and Preston Smith need to play well. The Packers don’t have much talent in the front seven, and they have even less talent in the secondary, so it will be important for the Smiths to get to Jimmy G.

Offensively, the Packers are no longer just Aaron Rodgers. Aaron Jones had a very good season toting the rock for Green Bay, and Matt LaFleur will try to use him often here. However, it wouldn’t be a shock to see Green Bay abandon the run in the first half after San Francisco completely shut down Minnesota’s vaunted ground game last week, forcing Rodgers to beat them through the air.

When Rodgers does pass, he targets Davante Adams at a very disproportionate rate. Adams ended up with 160 of Green Bay’s 243 receiving yards against Seattle last week, and he was targeted more than twice as often as any other receiver in the regular season despite missing four games. San Francisco has the league’s best pass defense and an excellent cornerback in Richard Sherman though, so Adams could be in for a long afternoon.

There’s no reason to think that this game will go any differently than the first meeting between these two teams. Lay the points with San Francisco on Sunday night.

Check out the latest NFL betting odds for the NFL Championship game.