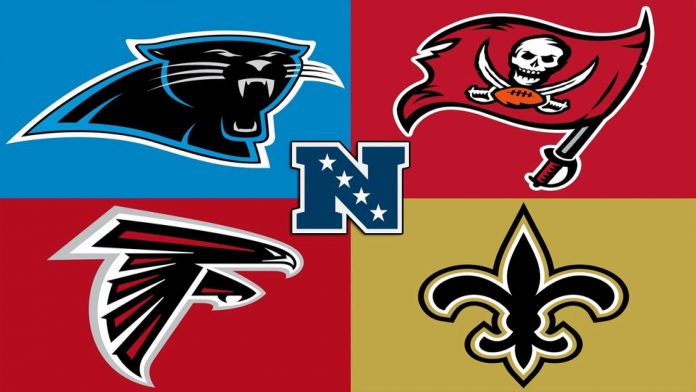 The NFC South was one of the most talented divisions in the NFL in 2017 and it is stacking up to be so again this year. The New Orleans Saints, Carolina Panthers and Atlanta Falcons all made the playoffs a season ago and each finished within a game of each other in the standings. The Saints won the NFC South by virtue of a tiebreaker over the Panthers and made it to the NFC Divisional Round before a last-second touchdown by the Vikings knocked them out of the postseason.

New Orleans returns a lot of talent on both sides of the ball, led by Drew Brees, and will enter this season as the favorite to capture the division once again. The Saints’ odds have improved because they have finally put a solid defense on the field to avoid forcing Brees to win shootouts. The running back addition of Alvin Kamara was also huge last season and the mixture of balance and Brees makes the Saints tough to beat.

The Falcons were on the precipice of winning the Super Bowl two years ago and then made it back to the playoffs a year ago, but the offense never quite performed like it did in 2016 under offensive coordinator Kyle Shanahan. The main pieces are still in place and if the offense can find its magic again this team has the potential to be very dangerous.

The Carolina Panthers have a solid defense once again and star quarterback Cam Newton. The team has been inconsistent often but always seems to find a way to win its share of games. The Panthers have lost many key members of their defensive coaching staff the past two years and it is fair to wonder if the departure of some smart minds will take its toll.

The Tampa Bay Buccaneers are the extreme longshot in a three-team race. The Bucs are the least talented team in the division and won’t have suspended quarterback Jameis Winston for the first three games of the season. This team is likely going to fall into a hole early and have trouble getting out of it unless the three others in the division manage to beat up on each other and allow the Bucs to hang around.

Everything seemed to go right for the Saints last year while there were plenty of stumbles for the Falcons, and yet they only finished one game apart in the standings. Brees is a year older and it’s fair to wonder if he’s going to start slowing down at some point. The Saints are a chic pick because of Brees and some young talent, but the Falcons at higher odds are a better choice.

Atlanta has a star quarterback in Matt Ryan as well as some great weapons, led by Julio Jones, and a solid offensive line. The offense should take a step forward this year while the defense is good enough to get the job done with a lead.

The Panthers’ odds aren’t favorable enough to choose them, while Tampa Bay is going to finish in last place by a significant amount, so that is not a worthwhile flier. This should end up being a two-team race with the Falcons the pick to win the NFC South even as both they and the Saints make it into the playoffs.