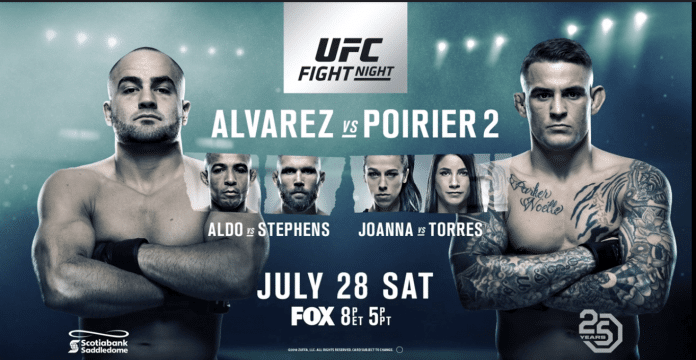 The UFC must really love Calgary, because the Canadian city is getting one helluva fight card this Saturday. UFC on FOX features a main event that’s likely to produce a Fight of the Year contender, along with a supporting main card that’s got the featherweight GOAT, the women’s strawweight GOAT and a blue chip prospect.

This main event, tho. Eddie Alvarez and Dustin Poirier are two of the most violent fighters at 155, and each has a Fight of the Year on their resumes along with handfuls of post-fight bonuses. They’re gritty AF and always seem to end up in a crazy firefight. You could put this fight as a pay-per-view co-main and it could easily still be the fight that most people are paying to watch.

Their first fight was a back-and-forth thriller before it ended with an illegal knee that left Poirier unable to continue. Now it’s time to settle the score once.

Can you believe it’s been 9 years and 14 fights since Jose Aldo hasn’t fought for a title? For the first time in his UFC career, the former champ is in a non-title contest. Call him done at your own risk – the Brazilian is still just 31 and his only UFC losses to date came against Max Holloway and Conor McGregor. His opponent, Jeremy Stephens, comes to scrap on a three-fight winning streak, and he could very well put Aldo out of the title mix for good with a win.

Joanna Jedrzejczyk is in a similar position as Aldo. After a dominating run of five title defenses, JJ is coming off back-to-back losses to Rose Namajunas. Now she’s just another contender in a rapidly growing division, in a crucial three-round tilt. On paper, Joanna schools Tecia Torres, but maybe her head ain’t right or the weight class has caught up to her. Torres is one of the most well-rounded, well-respected girls in the division and an excellent litmus test for the former champ.

A native French-Canadian, Olivier Aubin-Mercier will hold it down for the north against Alex Hernandez. ICYMI, the 25-year old Hernandez recently made his UFC debut on short notice and KTFO’d Beneil Dariush in less than a minute. Nobody does that to Dariush! Who is this kid? Mercier is gonna answer that question – he’s a very good prospect himself on a four-fight win streak.

It’s an awesome night of fights, with plenty of betting opportunities. Let’s take a look at the UFC odds at BookMaker.eu and break down your best options.

Let’s go back to their first encounter: Poirier was winning the striking exchanges with his length and diverse attack. In the second, Poirier hurt him bad enough to look for an ending flurry, but the Louisiana native’s penchant for getting clocked with big shots came back to haunt him, as Eddie turned the tide with some huge punches of his own. By the time the illegal knee ended the fight, it was anybody’s game.

We get why Poirier’s the favorite here. He’s the better athlete, younger and more dynamic with his striking. Alvarez punches harder and is more inclined to wrestle, but he failed to take down Poirier until he rocked him. Against each other, Poirier is slightly better equipped to fight a five-round war – though doubting the grit of either is a huge mistake.

We usually favor the underdog in a coin flip fight, but we lean towards Poirier here. Alvarez, now in his mid-30s is slightly past his prime and isn’t going to be able to consistently take Poirier down nor keep him pressed into the cage. In a prolonged kickboxing bout, we’ll take more spry Poirier as a relatively affordable straight bet.

It’d be ridiculous to write off Aldo due to his 1-3 slide. Sure, the Holloway scraps probably took a lot out of him, but he’s still just 31! You know who that one win came against? Frankie freakin’ Edgar, and it wasn’t a particularly tough fight for Scarface to begin with. Aldo’s speed, explosiveness and hair-trigger reaction times are still intact, though his gas tank has faded.

Stephens isn’t getting Aldo to the ground – far better wrestlers have failed to consistently do so. So does Lil Heathen have what it takes to outstrike a Muay Thai expert? He’s definitely evolved into more than a brawler since going over to Alliance MMA. Holloway laid out the groundwork to beat him, and while Stephens has the chin to follow the same path, it’s doubtful he has the cardio and the technique to replicate it.

Aldo is much better suited for three-rounders, where his gas tank won’t be as much as an issue. Stephens should put on a valiant effort, but he ain’t on the same level when as a striker.

Our pick: Fight goes to decision -165

Stephens can certainly blast through guys, but Aldo is still a tough dude to hit clean – and he hasn’t been a knockout fighter for a long time. This one should go to the cards, so if you’re hesitating on picking a winner, this is your bet.

Torres is going to be forced to kickbox with JJ. If Claudia Gadelha and Jessica Andrade couldn’t pin the Polish powerhouse to the mat, Torres won’t be able to either. The Tiny Tornado has a taekwando and karate background, so it’s not like she’ll be lost, but she’s going up against one of the most technical Muay Thai fighters on the roster and will have to compensate for a five-inch height difference.

Perhaps she can keep Jedrzejczyk pressed into the cage and work her dirty boxing? At 5’1”, Torres is a mighty mite, with a squat, muscular frame and the intelligence to use it. There’s a chance that Jedrzejczyk is damaged goods after the Namajunas fights, but given that she was competitive in the rematch tells us that’s probably not the case.

Our pick: Jedrzejczyk by decision at -290

Torres has never been stopped, and Joanna hasn’t finished anyone in years. The price on JJ to win is a bit to high for our liking, so we’ll roll with this prop to get a better payout.

It’s easy to get caught up in the hype of “Alexander the Great”. He’s just 25, a killer wrestler, built like a hulk and just beat a well-respected top-15 opponent on a few weeks notice. But let’s wait until he’s proven before we anoint him the next contender.

Mercier is probably not a better fighter than Dariush, but Hernandez doesn’t have the element of surprise anymore. Plus, he’s a judo black belt with stellar takedown defense – this isn’t somebody you can just bullrush. If their wrestling cancels each other out, OAM has developed a low-output style based on potshotting that could give a swarmer like Hernandez problems.

This pick has everything to do with the price and circumstance. Betting on a kid with hype is always a dangerous proposition, so if we can get an underdog price on a tough, experienced fighter, then it’s a good bet in our books.

Check out the latest UFC on Fox30 betting odds.