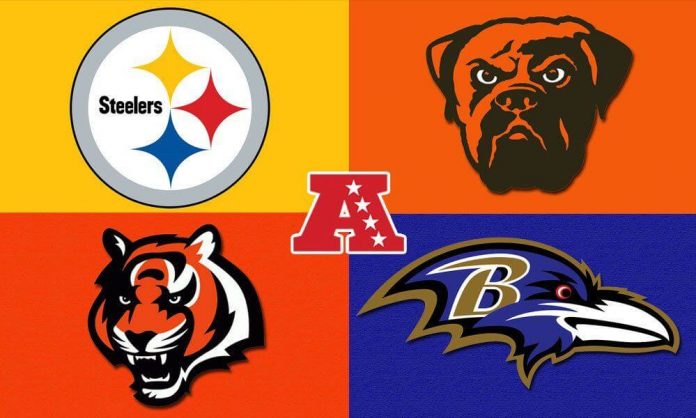 The biggest surprise coming out of the AFC North is that the Cleveland Browns (+1000 ) have the same odds as the Cincinnati Bengals to win the division. Not surprising is that the Pittsburgh Steelers are overwhelming favorites at -257 to win their third straight division title and fourth in five seasons.

On the surface everything looks great in Pittsburgh. Ben Roethlisberger hasn’t hinted at retirement this offseason and the Killer B’s are back to form one of the most dynamic offenses in the NFL. However, there is no Ryan Shazier playing defense, Le’Veon Bell’s contract continues to be a mess, as does Antonio Brown’s head.

While that probably doesn’t lead to the Steelers falling from their perch at the top, it could be just enough of a distraction to give the Baltimore Ravens a chance. The best bet is that the Browns and Bengals will be battling for last place and it’s hard to think the Ravens have done enough to make up the difference from last season. It’s been three seasons since Baltimore has been to the playoffs, their longest stretch since their first four years in Maryland, and they are hungry.

It’s Pittsburgh’s division to lose, and much like the Patriots in the East, the Steelers have a soft division schedule. The price isn’t as steep as the Pats’ but it’ll take a healthy wager to get some return. With Big Ben slinging the ball to Brown and JuJu Smith-Schuster, and Bell doing what he does, scoring points won’t be a problem. Bell’s ongoing contract dispute with the club could be a distraction, but this is a veteran group with stern leadership that will stick to playing football once the bell rings.

Finding a leader on defense to take over for Shazier is an absolute necessity. The Steelers were solid when he played, but they struggled after he was injured and giving up 45 points to the Jags in the playoffs was an embarrassment. Without help defensively, the Steelers aren’t good enough to win the AFC, but getting through the division is a likely scenario.

It’s hard to pick the second-best team in the division and one could make an argument that it isn’t Baltimore. The Ravens, and especially Joe Flacco, have regressed the last few seasons and the club drafted Lamar Jackson to push the veteran signal-caller. The Ravens have always been about defense and they’ve won a lot of games behind one of the best units in the NFL. That was the case last season as Flacco averaged less than 200 yards passing per game.

There were some issues, mainly with the receivers, and the Ravens addressed those by bringing in Michael Crabtree and Willie Snead to help out the 29th ranked passing game. Alex Collins was a stud over the final month of last season and Terrell Suggs is still plugging away on defense. I think the Ravens have a good shot at toppling the Steelers as long as the injury bug doesn’t sink them.

Browns And Bengals Are Longshots

The Browns had another good haul in the draft and should win some games this season. Expecting them to compete for a division title is too much, though. This is a club that has only one victory in the past two seasons after all. And winning 10 games, which is the minimum it would take to get to the top, is an exaggeration. Winning six games would make a great season, and the earlier in the season the better for Hue Jackson.

Jackson staying in Cleveland after an offer last season was perplexing, but not as much as Marvin Lewis still being gainfully employed in Cincinnati. The Bengals haven’t won a postseason game under Lewis, but they got there seven times in an 11-year stretch. That was enough to keep him around. But after two sub-.500 seasons there is reason to be concerned. After playing near the top of the division and conference for many years, maybe it’s time the Bengals sneak up on the pack. The talent is there and the offense can be good with its bevy of weapons. The onus is on Andy Dalton and Lewis to pick up the rest of the club and if they do the stripes could make some noise in the North.