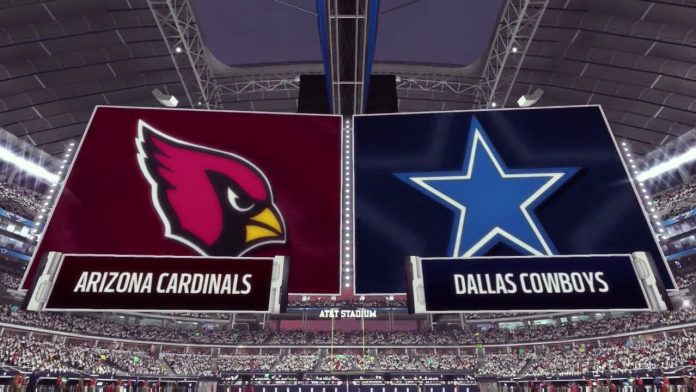 The early returns have been positive for the new-look Arizona Cardinals, who are one of eight teams that have yet to lose a game this preseason. The real test of the exhibition games takes place on Sunday Night Football when they visit the Dallas Cowboys. And the Cards could be without their top draft pick after Josh Rosen injured his hand in practice this week. Their presumed starter, Sam Bradford, is also working on creaky knees, leaving them vulnerable at that position.

There are no such worries on the Dallas sideline with Dak Prescott flashing the form that won him AP Offensive Rookie of the Year honors in 2016. Concerns about the Boys aerial attack that surfaced earlier in training camp have been silenced by Prescott in his brief time. Dak has completed over 72 percent of his preseason throws with a pair of touchdowns, leading the Cowboys to points on three of his four drives. His backfield mate Ezekiel Elliott isn’t expected to play, but it should be a fun evening nonetheless.

The expectations are rather low in the desert after the retirement of Bruce Arians and Carson Palmer left the Cards without a coach and quarterback. The team hired Panthers defensive coordinator Steve Wilks to replace Arians and when Bradford was discarded by Minnesota, the Cards reeled him in to man the position. The signing of Bradford is risky considering his multiple knee surgeries and the fact that he played just two games last season.

But when he’s healthy, he’s been good. Bradford hasn’t played much this preseason, but his knees have held up and his numbers are solid. Bradford completed all six of his pass attempts in last week’s win over the Saints and has yet to throw an incomplete pass this preseason. Rosen is the future and he might be the present. However, a hand injury sustained in practice could limit his reps this week and the offense will be impacted.

What made Prescott and Elliott so special during their 2016 rookie season was the play of an offensive line that many considered the best in pro football. First-round draft picks Zach Martin, Travis Frederick and Tyron Smith anchored the group that allowed Zeke to amass a franchise rookie rushing record while Dak threw for nearly 3,700 yards with 23 touchdowns and only four interceptions.

The line will have a different look for the foreseeable future. Martin sustained a knee injury in last week’s game and will be on the shelf until the start of the regular season. Frederick was diagnosed with an autoimmune disorder that has him out for an indefinite amount of time. Not only will the Boys be playing behind a thinned out front, the well-being of their teammates will also weigh heavy on them when they take the field on Sunday.

Mistakes are a part of preseason football, but no team has taken advantage of them more than the Cardinals this preseason. Recovering five opponent fumbles and intercepting three passes, the Cards lead the league in turnover margin with a plus-7 differential – in two games.

The Cards had four takeaways last week, all courtesy of Saints backup Taysom Hill, who lost two fumbles and tossed a pair of picks. There was another forced fumble that the Saints recovered or it could have been worse for New Orleans and better for the Cards. Still, four takeaways in each of the first two games isn’t bad for a team that totaled 21 takeaways and a minus-4 differential all last season.

A little more Dak should give the Cowboys a pretty good chance of winning this matchup. He’s been solid in his brief stint operating without Zeke while working with a group of pass catchers that doesn’t include Dez Bryant or Jason Witten. He’s found a favorite target in third-round pick Michael Gallup and the offense will be better with his ability to spread the ball around.

The most underrated aspect of the Cowboys is their defense, which has the potential to be really good. There are some issues in the secondary, but the starting front seven is athletic and aggressive led by Demarcus Lawrence. That group will make things difficult for the Cards to score giving value to the under.

NFL ATS Pick: Cowboys +1 and the Under