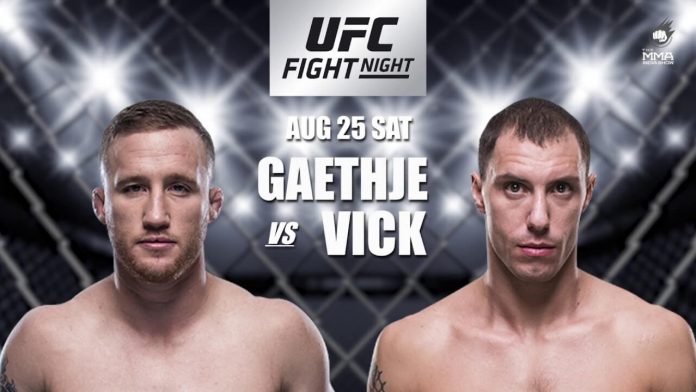 In three UFC fights, Justin Gaethje has produced back-to-back-to-back Fight of the Year candidates. His blood-and-guts style at the highest level of MMA makes him the ultimate icon for the #justbleed fans – a fighter who tests fellow fighters by eating their best punches and forcefeeding them his best shots in return.

For James Vick, beating Gaethje announces his arrival as a legitimate lightweight contender. But he’s going to have to swim into deep waters, then wrestle a school of sharks to come away with his hand raised. Because fighting an iron-chinned, steel-willed guy like Gaethje forces a man to dig deep into his soul and find out what he’s truly made of.

Any Gaethje fight is must-see television, but the UFC Fight Night 135 card in Lincoln has some solid supporting scraps as well. In the featherweight co-main, Michael Johnson meets Andre Fili in a matchup of two excellent strikers. Johnson has been in many of the promotion’s most memorable fights, including a thriller against Gaethje and a dogfight with Nate Diaz.

Angela Hill and Cortney Casey are both extremely aggressive strawweights, so putting them in a cage together should produce some fireworks. We’ve also got Jake Ellenberger, still plugging away and trying to hold off retirement, in a scrap with grinder Bryan Barberena.

As always, there are some great bets you can make on this card, so let’s jump right into our predictions and betting picks, with UFC Fight Night 135 odds courtesy of BookMaker.eu

Oddsmakers obviously aren’t keen on Gaethje’s style – it’s hard to back such a reckless fighter. When taking it on the chin seems to be a big part of your gameplan, you’re always in danger of getting iced. Of course, Gaethje is every bit as good as dishing it out and forcing opponents to wilt, so he’s definitely a live ‘dog here.

The Highlight will have to navigate the distance against the 6’3” Vick, who is the tallest lightweight on the roster. Up until recently, Vick had problems against ultra-aggressive fighters who marched him down, but in his last outing against Francisco Trinaldo, “The Texecutioner” was able to showcase some nice footwork and circling to evade the constant pressure of the Brazilian.

This being a five-rounder plays out in Gaethje’s favor, as he’s got the intangibles to go full zombie mode and outlast guys in an all-out dogfight. The question is whether Vick can irreparably damage him before Gaethje drains his stamina.

We love everything there is about Gaethje, but his style simply isn’t sustainable. Though Vick isn’t on the same level as Eddie Alvarez or Dustin Poirier – the men responsible for Gaethje’s current two-fight losing skid – they provided the blueprint to beating him. It’s going to be extremely difficult to follow it, but Vick is peaking as a fighter and his money line is definitely playable as a single bet.

Johnson is a scary dude to bet on. In pretty much all of his fights, there are moments where he looks like a legit title threat. On tape, he’s got the tools to beat anyone – but he consistently finds a way to lose. He’ll deftly circle and light guys up with his quick hands, only to plant his feet and get into a slugfest a round later. He’ll brawl with brawlers and try to wrestle wrestlers. And when things start going for south for The Menace, they tend to spiral quickly.

A matchup with Fili is a risky one, as “Touchy” is quick and dynamic himself. Fili also excels in scrambles, an area where Johnson can get panicky. There isn’t a single dominant trait about Fili, but Darren Elkins proved that steely resolve and opportune offense can be enough to hand Johnson a loss. Fili and Johnson are both similar in the fact they both make fight-ending mistakes, but Johnson has done it in far more high profile scraps.

Johnson might be 1-5 in his past six, but all of those losses came against guys with extraordinary abilities. Fili doesn’t have that in him. The return you can get on a clearly more talented fighter is solid here.

It’s getting harder and harder to watch Ellenberger lace up the gloves and get his brain scrambled. He’s 3-7 in his past 10, and The Juggernaut was finished in all but one of those losses. Most of that was because he was facing elite competition, but journeyman Ben Saunders folded Ellenberger with a knee in his last outing.

Bryan Barberena ain’t nothing but a midcard fighter, but right now that’s enough to beat a faded Ellenberger. While he’s not on the same level when it comes to standup, Barberena does have the knockout power to make up ground in that area – especially since Jake can’t take a punch anymore. “Bam Bam” will obviously be more comfortable taking this to the ground, but his opponent’s takedown defense is one of the only things that’s held up as he’s aged.

Admittedly, this is a fight to avoid. The price on Barberena to win straight up is too expensive even as a parlay anchor, so the next best value is the TKO prop. We also wouldn’t be opposed to taking the fight to go to decision at the current price, since Ellenberger does have the skillset to play defensively in the standup until the final bell.

Hill’s first official UFC fight was just the second of her professional career, and her inexperience showed as she was relegated to Invicta FC after two straight losses. Four wins and the Invicta FC title earned another shot in the big show, though Hill has only managed a 2-2 record in her second go-round. Still, her exciting fight style should keep her around as a solid mid-level strawweight.

Against Casey, Hill will have to deal with a bigger, stronger fighter. Both women can be aggressive, but Casey has shown an ability to play counterstriker as needed. This could be the key against Hill, who was flummoxed by Nina Ansaroff’s defensive techniques in a fight where “Overkill” was the favorite.

While Casey should have her moments, her lack of activity is a persistent problem. She usually just does enough to stay competitive, while Hill is always in attack mode. Since there’s little chance this fight ends early, we’ll take the fighter who will surely be more active – at a very affordable price.