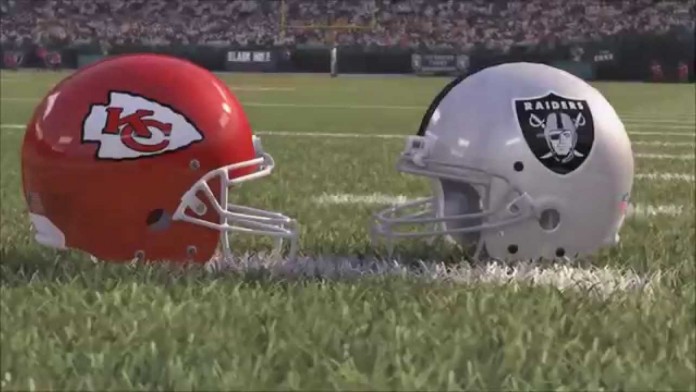 But as we know all too well, the NFL’s notorious catch phrase of “Any Given Sunday” rings true. While the Chiefs are still in contention for the division crown, the Raiders have nothing to play for; in fact, they would get a much better NFL draft pick by losing this game. Let’s take a look at the reasoning for both teams to cover the spread.

Why Oakland Will Cover the NFL Spread

The Raiders had an emotional victory at home last week, as Raiders icon Charles Woodson won his final home game. The Raiders defeated the San Diego Chargers in overtime, by a score of 23-20. Despite trailing for most of the game, Oakland came back to send the game to overtime, then won on a field goal followed by forcing a turnover on downs on defense.

The Raiders dominated San Diego in rushing yards by a total of 106-72, marking the fourth time in five games that they’ve out-rushed their opponents. With a 7-8 record, Oakland can finish with a .500 record. For the NFL betting lines, Oakland is 6-4 against the spread when not favored and an amazing 3-0 when they score more than six points.

Why Kansas City Will Cover the NFL Spread

The Chiefs and Arizona Cardinals each have a nine game win streak ongoing, after their 17-13 victory over the Cleveland Browns last week. The win also netted the Chiefs a playoff berth and a shot at the division crown.

Kansas City scored ten straight to open the game, then took a 17-3 lead at the half. Though the Browns actually gained more total yards, the Chiefs held on for the win; third time this year that the Chiefs were out-gained in total yards.
The Chiefs are 7-4 against the spread this season when conceding points, and a stellar 7-1 when allowing fewer than ten points. Given the Chiefs’ stout defense, this is a good bet.

Given that the Raiders are out of the playoff chase, and the Chiefs are still in the divisional mix, the Chiefs are the smart pick here. Furthermore, there may be no hotter team in football betting right now than Kansas City.

What are the other teams to watch for the remainder of the 2015 season? NFL football odds favor a 16-0 season for the Carolina Panthers