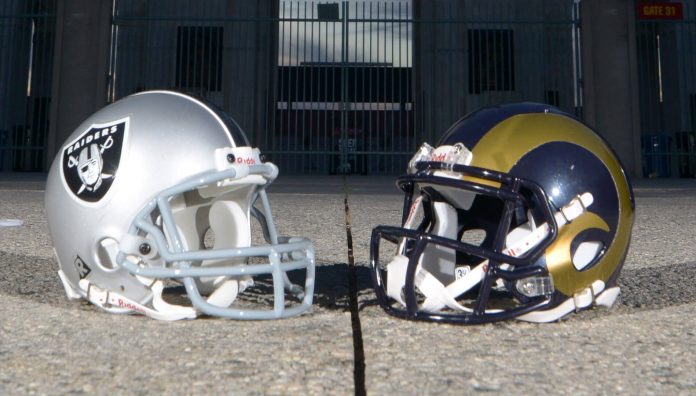 The Los Angeles Rams may be content to keep most of their talented parts under wraps during the exhibition games. Quarterback Jared Goff and some other key pieces may not play in Week 2 of the preseason against the Oakland Raiders. It not only would keep the players healthy, but complicating matters is the fact that these two teams face off to begin the regular season.

Obviously neither side is going to show too much of their hand in this one, so it’s hard to say which side will come out on top. The Rams are the slight favorites by virtue of the home field advantage.

This game will be held at the Los Angeles Coliseum in Los Angeles, California at 4 p.m ET on Saturday, August 18th, 2018. The game will be nationally televised on NFL Network.

The Rams have been listed as the slight 1-point favorites for this matchup. The Raiders have gotten nearly 70 percent of the action, which makes sense considering each side could play almost all backups because of the rematch in a few weeks. Los Angeles is the -115 favorite on the moneyline.

The scoring total is listed at 38.5 points. The “under” is the much more popular choice, as 85 percent of the action is heading that way.

The Rams were smoked by the Ravens, 33-7, in their preseason opener. An offense that led the NFL in scoring a season ago was dormant in this one because most of its stars played little or not at all. Goff sat out, as did star running back Todd Gurley and new receiver Brandin Cooks. The Rams also kept some of their elite defensive players on the sidelines. This team knows it is good and is willing to trade any advantage of getting into a preseason rhythm for the guarantee of avoiding injury.

The Raiders began the preseason with a 16-10 win over the Lions. Starting quarterback Derek Carr did play for Oakland, completing 2-of-4 passes for 11 yards. Backup quarterback Connor Cook played well, completing 11-of-19 passes for 141 yards and a touchdown. Jordy Nelson and Martavis Bryant both played as Oakland was more willing to use its starters.

Both teams are currently missing superstars. Rams defensive tackle Aaron Donald is holding out because he wants a new contract and Raiders pass-rusher Khalil Mack is doing the same. While neither would have played a ton in this game, it’s possible one or both could have registered a sack or a forced fumble based on their ridiculous skill level.

Donald and Mack are game-changing talents and Defensive Player of the Year candidates provided they return to their teams. As it currently stands, neither will be on the sideline for this matchup.

Raiders vs Rams – Who To Bet On

The Rams could very well make a Super Bowl run but they are treating the preseason like the meaningless exhibition it is. The Raiders seem to care a little bit more under coach Jon Gruden. This should be a very vanilla contest as neither side wants to show the other any tricks up their sleeve, but expect Oakland to try harder and come away with the win.