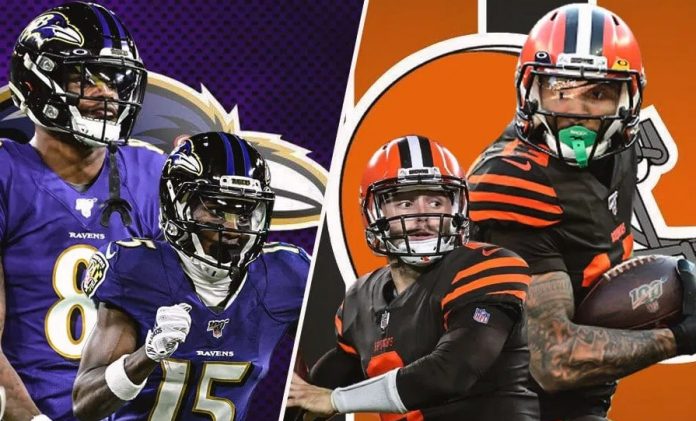 Ravens in Fight for Playoffs at Surprising Browns Monday Night

In view of their 2019 success, this season has been a stunning reversal for the Baltimore Ravens.  Baltimore was the top AFC seed in the 2019 playoffs and quarterback Lamar Jackson was NFL MVP.  Baltimore was the heavy Super Bowl betting favorite in the playoffs.  However, Tennessee cracked the Ravens’ code in the AFC Divisional Playoff game.  Baltimore’s stunning loss to the Titans was a portent of things to come.  Jackson and the Ravens have struggled all year.  And their Monday night home loss to the defending champion Chiefs earlier this year confirmed to many that Baltimore was a fraud.  Counter to that is a Cleveland Browns team known for its perpetual losing ways.  However, Cleveland is going through an impressive transformation in 2020. Because the Ravens and Lamar Jackson still resonate with squares the line should be close.  Baltimore remains in the eyes of the public a top tier NFL betting contender.  Despite their problems, casual gamblers still see the Ravens as a quality team.  Contrarily the Browns’ years of failure remain reflected in the betting odds.  The masses are yet to catch up with the new winning results of the Cleveland franchise.  Thus, there may still be some hidden value with the Browns.  The tricky handicapping factor is how much support public Baltimore has lost?  Oddsmakers will be working overtime to analyze that factor.

Baltimore destroyed Dallas in a 34-17 win and cover with the pro football lines Tuesday.  Now the Ravens are 7-5 straight up, 6-6 against the spread, and 5-7 under the total.  Baltimore ranks 23rd in the NFL for total offense.  But defensively they rank third for points allowed.  Of great concern is that the Ravens are dead last for passing offense. Last week Cleveland scored a 41-35 pro football betting win and cover at Tennessee as the Titans were 4-point favorites.  Over the total of 54 saw the payout window as well.  Now Cleveland is 9-3 straight up, 5-7 against the spread, and 7-5 over the total.  Offensively the Browns rank 16th for total offense and 15th for scoring.  Defensively they are 19th overall and 22nd for points allowed.

Baker Mayfield is having a breakout season for the Browns with a 97.9 QB rating, 21 touchdown passes, and 7 interceptions.

Baltimore Ravens at Cleveland Browns Against the Spread

Baltimore has covered seven of their last 10 games against Cleveland.  While these teams are 2-6 under the total against each other.  At Cleveland, the Ravens have paid in four of their last five.  Specifically, this series has gone under three straight times at Cleveland. In this situation expect the Ravens to rise to the challenge of saving their season.  Baltimore is coming off a strong performance against Dallas.  They were focused and determined.  As mentioned earlier Baltimore has had the NFL betting odds advantage over Cleveland.  Also factoring is the fact that Cleveland won’t be able to ambush the Ravens.  The national and gambling spotlight is now on Cleveland.