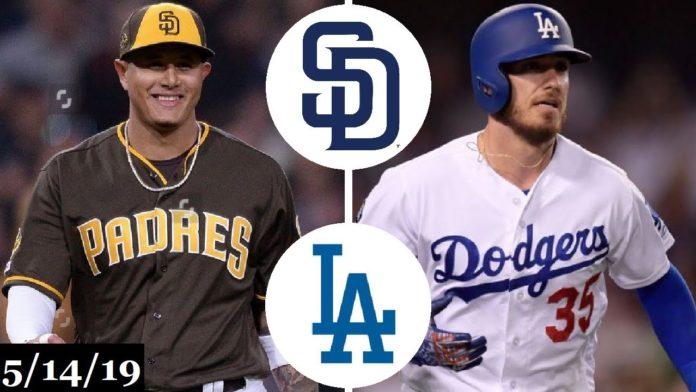 If the San Diego Padres are to dethrone the Los Angeles Dodgers in the NL West, they’ll need to beat them head-to-head. And if the first series between the clubs is any indication it should be fun. But the Padres also need to win games against other teams. Maybe they were looking ahead to this four-game set at Dodger Stadium which is one reason to explain a three-game sweep at the hands of the Brewers. The division heavyweights finish off their series on ESPN Sunday Night Baseball with San Diego’s Joe Musgrove scheduled to oppose Dodgers righty Dustin May.

The contest between NL West rivals takes place on Sunday, April 25, at 7 p.m. ET from Dodger Stadium in Los Angeles, CA. The game will air live on ESPN with betting options for every game on the 2021 MLB schedule available at BookMaker.eu.

It’s been a difficult start to the season for the Padres, who are considered the biggest threat to the Dodgers in the NL West. They lost Fernando Tatis Jr. for a spell with a shoulder ailment and they dropped five of six games heading into this series producing a total of eight runs in the last five games of that run. Even more concerning is that five of those runs came in one game, a 5-2 win over the Dodgers last week to avoid a three-game sweep. They were shutout twice during that span and totaled three runs in three games against the Brewers. The Padres cashed the UNDER in five straight games.

While the Padres have had a tough time adjusting to their new status as a division power, the Dodgers have been as good as advertised, and maybe even better, showing no signs of a championship hangover early in the year and not about to relinquish their crown anytime soon. A loss to the Padres last week put an end to their eight-game winning streak and started a mind-blowing two-game slide for the boys in blue. Good pitching is designed to avoid lengthy losing streaks and the Dodgers have good pitching. They got a combined one-hit shutout from Julio Urias, Victor Gonzalez and Kenley Jensen to beat Seattle 1-0 on Tuesday, ending the mini slump.

The Dodgers enter this series with the best record in baseball at 14-4 and they won their first six games at Dodger Stadium outscoring Colorado and Washington by a combined 31-12. They also got the upperhand over the Padres by taking two of three in San Diego last weekend in the much anticipated first meeting between the clubs. LA did it with timely hitting, strong defense and solid pitching, a recipe that has them favored to win another World Series title.

He was the least heralded of San Diego’s offseason pitching acquisitions, but Joe Musgrove (2-2, 1.04 ERA) has been arguably the best. And he will forever go down in Padres lore as the first pitcher in franchise history to throw a no-hitter. He didn’t surrender a run over 15 innings of his first two starts and was touched for just three hits. One of those starts was his 10 strikeout no-hitter at Texas on Apr. 9.

In his first start after the no-no, Musgrove lasted only 4.0 innings in a loss to Pittsburgh giving up four hits and a run. He hasn’t received much support from his mates the last two outings with the team scoring just one run in each contest, denying Musgrove the chance to improve on his win/loss record. One path to success against the Dodgers is limiting chances. Musgrove has walked three batters in 26 innings with a miniscule 0.54 WHIP. He’s facing LA for the first time this season.

Having a guy like Dustin May (1-1, 2.93 ERA) as your fourth or fifth starter shows you how deep the Dodgers rotation is. May tossed six shutout innings with eight strikeouts to beat Oakland in his first start of the season. He hasn’t been as good over the last two, but we’ve seen an uptick in his strikeouts. He fanned eight Mariners in 5.0 innings in his last start, but two of the four hits he allowed left the yard and he suffered his first setback of the campaign. May has 22 strikeouts in 15.1 innings over three starts. He hasn’t gone past the fifth inning in his last two.

May has a history against San Diego in his brief career. He’s appeared in seven games making four starts and is 1-3 with a 2.97 ERA. He has 25 strikeouts over 30.1 innings in those games, but he’s also been touched for four homers and 24 hits.

The Padres need production from Tatis Jr. if they are going to have success against the Dodgers or any team for that matter. He is just 3 for 21 at the dish since returning from his shoulder injury and the offense has been stagnant. For the season Tatis is batting just .154 with two home runs and three RBIs.

Our Pick: San Diego Padres and UNDER

May is the weakest link in LA’s rotation and the Padres better get to him. I expect Tatis and Wil Myers, who is coming off an absence due to a sore leg, to provide a spark. The Padres enter the series with the best team ERA in the Majors and they actually outscored the Dodgers in regulation innings during last week’s series.