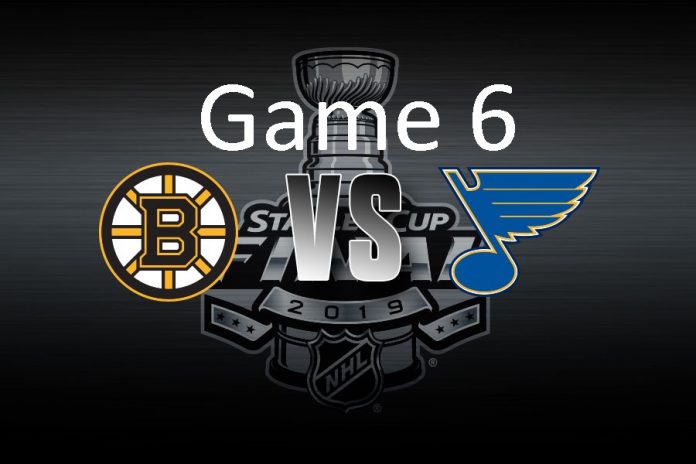 The St. Louis Blues pulled off a shocker in Game 5 of the Stanley Cup Finals, and now go home with a chance to clinch the championship. St. Louis was the underdog heading into this series but has a 3-2 lead heading into the all-important Game 6.

The Bruins are the more talented team so they will still be confident they can claim victory and head home for a do-or-die series finale. The Blues hope it doesn’t get that far and they will be the favorites to win Game 6.

St. Louis is listed at -130 on the moneyline to win this game and claim the Stanley Cup. The Bruins are heading in as the +110underdogs to win Game 6. The goal total is listed at 5 despite a low-scoring affair in Game 5.

Ryan O’Reilly and David Perron each scored goals and Jordan Binnington did a great job in goal with 39 saves as the Blues upset the Bruins with a 2-1 win in Game 5. O’Reilly scored in the second period and St. Louis went ahead 2-0 on Perron’s score. The Bruins pulled back within a goal when Jake DeBrusk found the net in the third period, but they could not score again.

Boston had way more shots than St. Louis but couldn’t capitalize on the vast majority of the chances. The Bruins pulled their goalie with about a minute to go and had several shots in the frantic final moments but could not tie the game. St. Louis has now won two straight games in the Stanley Cup Finals to get on the cusp of a championship.

Bruins captain Zdeno Chara suffered a broken jaw in Game 4 but he still was able to play in Game 5 despite the pain. Chara was one of the most used defensemen on the team, finishing with 16 minutes played. He wore a full face mask on the ice but didn’t finish with a goal or an assist as the Boston offense was held in check. He finished with a negative-1 plus/minus as St. Louis scored when he was on the ice.

While the injury is a serious one, Chara did not seem hindered and should be good to go for this Game 6 matchup. His presence is certainly a boost for the Bruins.

The Blues are heading home and have all the momentum, but in truth they were pretty lucky to come away with the victory in Boston. The Bruins need to get off to a strong start because if they fall behind, the St. Louis crowd is going to be whipped into a frenzy.

Boston has the superior firepower on offense and a player like Patrice Bergeron could help it get ahead early. If the Bruins can withstand the Blues’ energy early on they should be able to win this game and send it back to Boston for a do-or-die Game 7. This has been a fantastic series and it will go the distance with Boston claiming Game 6.