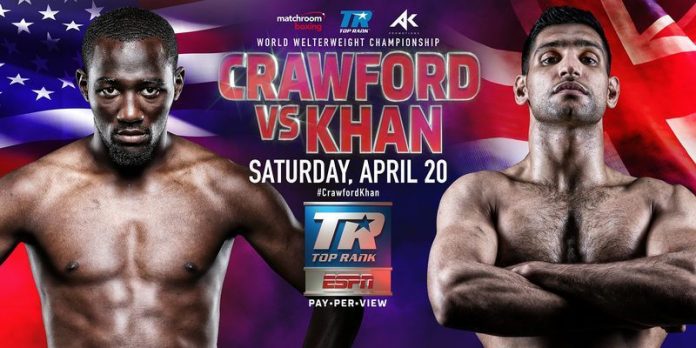 Amir Khan has worked his way up the ladder and is set for a chance at the WBO welterweight title in a championship fight this weekend. However, the oddsmakers see little likelihood that he walks away with it. Terence Crawford is the current title-holder and has a spotless professional record.

Crawford will look to add another big name to his list of conquests in this showdown. Khan has a decorated career and has been in the spotlight for a long time but Crawford is more talented and is widely expected to pick up another win and title defense.

Khan will need to fight a nearly-perfect bout in order to have a shot at the upset and the welterweight championship belt.

The oddsmakers are all in on Crawford, who has been listed as the heavy -1500 favorite to win this fight and remain atop the sport. Khan is listed at +876 to pull the upset and his ability to do so would pay off very impressively. The over/under on number of rounds this bout lasts is set at 9.5, with the “under” the -214 favorite and the “over” the +164 underdog.

Crawford has anointed himself the best pound-for-pound fighter in the world, and while that is up for debate, there is no questioning his sterling resume to this point. The 31-year-old has a record of 34-0 in his career with 25 of those wins via knockout.

Crawford is interesting in that he can comfortably fight both orthodox and southpaw, which makes things tough on his opponents. Crawford won the WBO lightweight title with a unanimous decision over Ricky Burns in March of 2014 and hasn’t looked back. Crawford retained that belt a couple of times and then added the vacant WBO light welterweight title to his list with a sixth-round technical knockout of Thomas Dulorme in April of 2015.

Khan has a career record of 33-4 with 20 wins by knockout. Khan held the WBA light-welterweight championship belt for several years as he won 26 of his first 27 career fights, but has not had the same success since then as the competition has really ramped up.

Khan lost back-to-back fights to Lamont Peterson and Danny Garcia with a plethora of belts on the line in 2011 and 2012. He bounced back with five consecutive victories to set up a colossal showdown with Canelo Alvarez for WBC, The Ring and lineal middleweight titles in May of 2016 but lost via sixth-round knockout.

Khan has won two straight fights heading into this one, capturing a first-round TKO of Phil Lo Greco and following that up with a unanimous decision win over Samuel Vargas last time out.

Our staff pick: Terence Crawford to knock out Amir Khan in the seventh round

Khan is a good fighter but he is not great. Crawford, meanwhile, is a star. This is going to be a lopsided fight, especially once it gets to the middle rounds and Crawford figures out Khan’s game plan. Khan is going to make a big mistake early enough, which will allow Crawford to pounce.

The odds for Crawford to win are too steep, so take the “under” on the number of rounds this championship fight lasts.