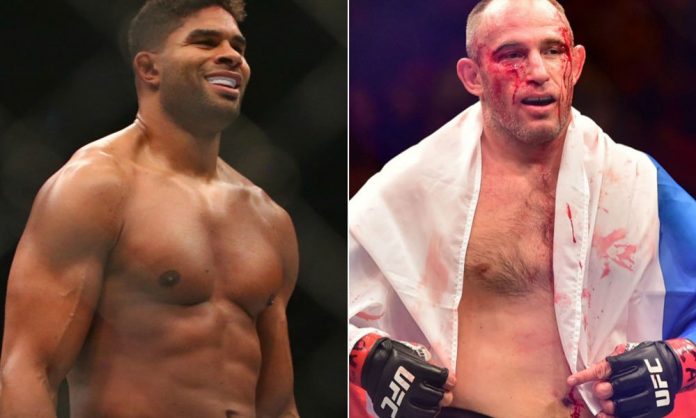 When it comes to heavyweight action, there are few fighters that deliver as consistently as Alistair Overeem. It goes both ways: the 38-year old has the kickboxing skills and power to finish anyone, but his cracked chin puts him at a high risk of getting flatlined every time he steps into the cage. That’s why every one of his fights is so compelling.

We will say this for The Reem: even in this very late stage of his career, he is still one of the top UFC heavyweights. Beating him still means something, and he’s the guy you have to beat if you ever want to be considered a legit title contender. That sets up a huge opportunity for his opponent this Saturday, Aleksei Oleinik.

Stepping in for Alexander Volkov on just a few weeks notice, Oleinik gets a chance to headline a card in his native Russia. The 41-year old could also leap into the top 6 with a win, which would be a pleasant surprise from a guy the UFC really wasn’t expecting too much from.

Oleinik is an intriguing fighter in his own right. To date, he is the only fighter in UFC history to hold an Ezekiel choke finish – and he’s done it twice. 45 submission victories in 57 career wins shows you just how dangerous he once he wraps his arms around you. “The Boa Constrictor” is a fitting nickname, as he tightens like a vise when it comes to chokes.

The matchup headlines UFC on ESPN+ 7 – which quite frankly might be the weakest card in 2019 so far. It’s basically a one-fight card supported by a lot of people you’ve never heard of, so we’re focusing on the main event here. Let’s take a look at the UFC odds at BookMaker.eu, the FightMetric stats, and your best betting options.

Overeem pretty much finished his fight camp preparing for a 6’7” long-distance striker in Volkov. Now he’s fighting a 6’2” submission specialist. We’ve got to say that this is a much more favorable matchup for The Reem on paper. Overeem is younger, bigger and stronger than his new opponent.

Time and time again, we’ve seen that Overeem thrives when he can be the bully. Oleinik is a legit big man, but it’s hard not to see him getting physically overpowered here. Because the Russian doesn’t have killshot power, that opens up the former Strikeforce champ’s already-lethal arsenal even more. That’s a problem for the hometown favorite, as Overeem is a stellar striker to begin with. Oleinik isn’t lost in that area, but he’ll be at a huge disadvantage.

If you peep the FightMetric stats, Oleinik’s takedowns might be a difference-maker in this matchup. Landing nearly 3 takedowns a fight, this matchup becomes much closer if it hits the mat. Overeem has good takedown defense, but guys like Curtis Blaydes have shown that it’s not impenetrable. Of course, Oleinik will have to get past the sprawl and chain together his attempts to bring his opponent down.

While Overeem’s chin will always make him a risky pick, we just don’t think Oleinik has the standup to really test it. On top of that, the Dutchman has solid submission defense, which takes away much of Oleinik’s strongest traits.

A small bet makes sense if you’re looking to hedge any play. This outcome represents the only way that Oleinik wins, and the payout is hefty.