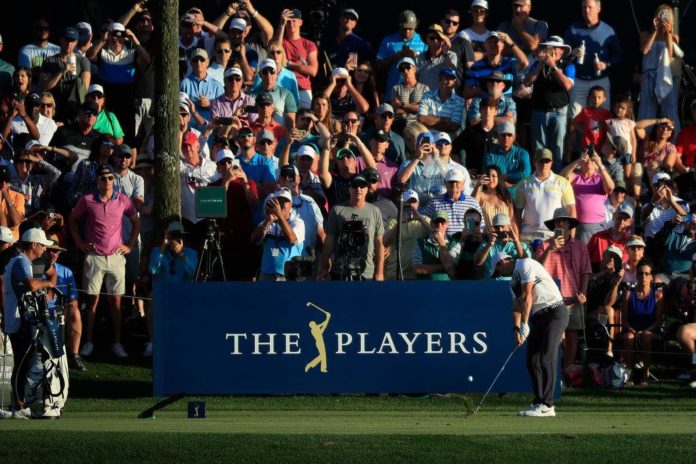 It isn’t so much about who’s playing this week. The PGA Tour’s unofficial fifth major always draws a top-notch field with 48 of the world’s top-50 players scheduled to peg it up. Rather it’s more about who won’t be in the lineup for THE PLAYERS Championship. Phoenix Open champ Brooks Koepka withdrew due to injury and who knows if we’ll ever see Tiger Woods on the links again. Still, a stacked field will attack legendary TPC Sawgrass with hopes of earning one of the biggest payouts on Tour.

It isn’t a surprise to see Dustin Johnson at the top of the odds board. He’s been there in just about every tournament he’s played this season. DJ has a win and a runner-up in his last six starts but is coming off an uncharacteristic T54 at the WGC Workday. Bryson DeChambeau is coming off a win at last week’s Arnold Palmer invitational and sits with defending champ Rory McIlroy and Jon Rahm as co-second favorites. It was one year ago when THE PLAYERS was canceled after one round due to growing concern over the coronavirus. That means McIlroy had some additional time to take in the defending champ role. Visit BookMaker.eu for a complete, updated list of betting odds and to place your wager.

Vedra Beach, Fla. Parts of the tournament will be televised on both Golf Channel and NBC.

A quick glance at the odds tells us this is going to be tight, at least that’s what the oddsmakers are thinking. A total of 10 players were listed at +2001 or shorter with each having bragging rights. With so many quality golfers in the field there is value in picks further down the odds board. It might seem like a smart play to back the favorites, but that move can backfire. A few years ago Si Woo Kim shocked the golf world by winning THE PLAYERS as a 500/1 longshot. That’s not always the case and more times than not the high-profile players are dogging it out for the title. Johnson’s T5 in 2019 was his best finish at this event when he was the only player to go under 70 in every round. There are others who have enjoyed more success at Sawgrass, but none have played as well as DJ has recently which is why he’s at the top.

One player I’ve been high on for some time is Xander Schauffele. He’s come close on several occasions only to end up outside the winner’s circle. I keep saying he’s going to win sooner rather than later and I still believe he will. However, the X-Man had his streak of 16 straight top 25 finishes come to an end at the WGC. He’s been so good for long stretches during his career that the T39 is just a bump in the road. At some point, though, it has to be a concern that he hasn’t cashed in a victory.

Can Bryson DeChambeau do it again? He followed up his U.S. Open win by claiming the API title last week and just continues to roll. Sawgrass doesn’t look like the ideal layout for his booming drives with plenty of obstacles in the way. But he’s flashed a solid all-around game leading the Tour in strokes gained: tee to green and par-3 scoring. I typically stay away from the previous week’s winner since it’s difficult to go back-to-back, but DeChambeau is an exception.

There are just so many great players in the field all with a chance at claiming victory. Johnson should bounce back from his disappointment at the WGC and it’s actually been a while since McIlroy claimed a victory. That just shows us how hard it is to win on Tour.

Much like Schauffele, Tony Finau has been good but hasn’t transformed the success into wins. He fell in a playoff a few weeks back at the Genesis and he had four top-5s in five starts before finishing 14th at the WGC. While Finau has been collecting top finishes for some time, we’re seeing the return of Jordan Spieth. His game had been in the dumpster for a few years but he’s snapped out of it with four straight top-15s with three of those among the top-5. And at his current price he’s well worth the investment.

You could throw a dart at the field and have a pretty good chance of picking the winner. But like I said, the cream usually rises to the top in the big time tournaments, and this certainly counts as a big timer. Sawgrass isn’t long but it does have challenges. It becomes a second shot course taking away advantages certain players have. The player that avoids the big numbers has a good chance of contending come Sunday, and that player is Johnson.