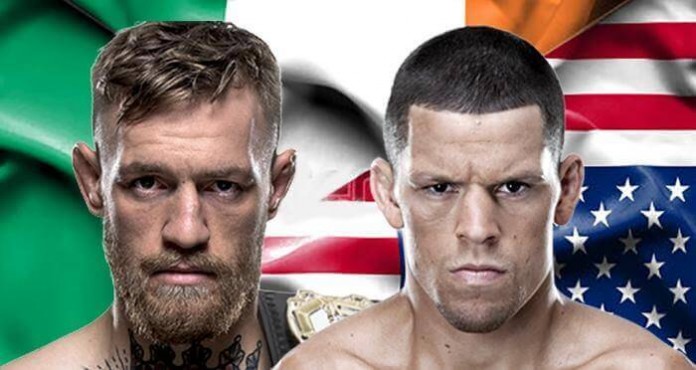 There might not be any belts at stake when Conor McGregor meets Nate Diaz, but the buzz for UFC 196 couldn’t be louder. That’s because this matchup is a perfect storm between two of the best trash-talkers the sport has ever seen – and the UFC 196 odds are somehow bigger than for a historic champion vs. champion bout.

UFC odds at BookMaker.eu opened with McGregor as a clear favorite at -355. Nate Diaz opened as a near 3-to-1 underdog at +290. Early action has come on the chalk as the Irishman was priced at -390 on Thursday morning.

While the fight will take place at welterweight to spare Nate Diaz a brutal weight cut to 155 pounds, oddsmakers have to question what kind of fight shape the Stockton native will be in with just 11 days notice. Even with a full training camp, it’s likely that Diaz would still be a sizeable underdog.

Why McGregor Is a UFC Favorite

While Diaz possesses elite boxing skills, there are still a few clear flaws in his game that can be exploited. First and foremost is his failure to protect his lead leg. He puts a lot of weight on it and rarely checks leg kicks. We’ve seen numerous fighters turn that right leg ghastly shades of purple. McGregor has an endless arsenal of flashy kicks and should be able to do the same.

Secondly, Diaz is hittable. He’s not particularly fast or athletic, relying more on stamina and durability to wear down opponents. Against a guy with murderous power, Diaz’s tendencies to take punches might be his doom. Mystic Mac KO’d Jose Aldo – a fighter who had never been knocked out – in just 13 seconds. His left cross might just be the deadliest weapon in the UFC right now.

Lastly, UFC betting lines aren’t completely dependent on who oddsmakers think will win. Fight odds are about trying to even out the wagers on both fighters to try and cover risk. Because McGregor is insanely popular and has a legion of loyal followers, most of the time it’s in the sportsbook’s interest to make him more expensive and assign higher payouts to his opponents.

It’s a shame that we only get about a week of buildup for a UFC fight between the two of the biggest personalities in the club. For the most part, McGregor’s opponents have tried to take the high road and ignore his antics. There’s no chance that a Diaz brother would let that slide.

Diaz infamously knocked Donald “Cowboy” Cerrone’s hat off during a staredown. Nick Diaz face-palmed Frank Shamrock with his middle finger during a weigh-in. The elder brother also drove to the hospital after his fight with Joe Riggs to go an extra round with him – inside the ER. Both jumped Jason Miller in a post-fight brawl live on CBS. The list goes on and on.

Perhaps it’s for the best that there’s no world tour between the two, like there was with McGregor and Aldo. Putting Conor and Nate in the same room over and over again wouldn’t be just playing with fire, it would be like playing with fire in a room filled with every explosive imaginable. We’d probably never even get to the fight. Let’s just be thankful this is happening in less than two weeks.

Oh yeah, the co-main event features the woman who demolished MMA goddess Ronda Rousey in two rounds. Holly Holm puts her title belt on the line against Miesha Tate at UFC 196. Holm is currently a -370 favorite in UFC betting odds, while Tate checks in as a +305 underdog at BookMaker.eu.

Is UFC betting about to become legal? Take a look at the odds in Is Legal Sports Betting About to Be a Reality in the US?