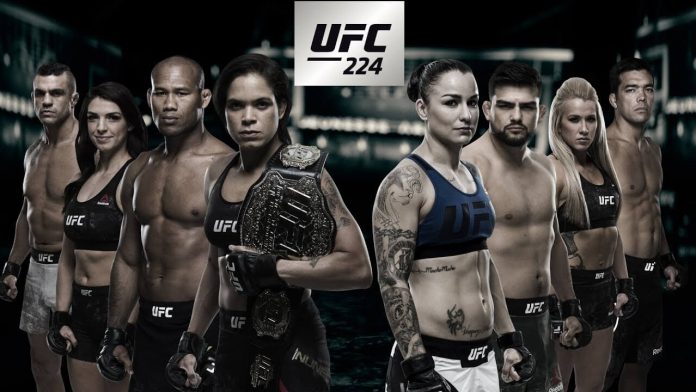 This Saturday’s UFC 224 in Rio de Janeiro the redheaded stepchild of pay-per-view events. Fight fans, and to some extent Dana White, are pretty much just ignoring its existence.

The fight lineup is mediocre, and it suffers from being sandwiched between a drama-filled UFC 223 and a loaded UFC 225. You have to feel a bit for women’s bantamweight champ Amanda Nunes, who is a headliner in name only. Even though she retired Ronda Rousey and Miesha Tate – the division’s two biggest stars – with brutal thrashings, none of that starpower rubbed off on her.

This is how important the “it” factor is in MMA. There’s no reason Nunes shouldn’t be a star. She’s the first openly gay UFC champ – an explosive striker and the only true knockout artist at 135 pounds. With the exception of the Shevchenko fight, “Lioness” is an exciting watch. As the division stands today, it looks like she might be one of the promotion’s most dominant champs for a while.

None of that matters if fans don’t care. And part of that has to do with her opponent. We were teased with a Nunes vs. Cyborg fight, which would have been a sick superfight. Instead we get…Raquel Pennington? Girl hasn’t fought since 2016, and even hardcore fans would have trouble recognizing who she is.

The only meaningful scrap on this card that fans are excited about is the middleweight tilt between Kelvin Gastelum and Ronaldo Souza. Not only is it an extremely competitive matchup, it’ll likely decide who gets to fight for the title next. Champion Robert Whittaker makes his first defense against Yoel Romero next month. Winner of this scrap gets next.

Also on this card is uber-prospect Mackenzie Dern, who will try to move past a weak UFC debut. She kept her undefeated record intact, but really wasn’t impressive for a fighter labelled “The Next Ronda Rousey”. Veteran Amanda Bobby Cooper gets a chance to derail the hype.

We also get a pretty fun legends fight between former lightweight titleholders Lyoto Machida and Vitor Belfort – two dudes who are aging rapidly. Despite their long careers, they’ve never actually met in combat. Catch this one now, then wait for the Bellator rematch in 10 years.

The good thing about being a sports bettor is that hype doesn’t matter. There’s money to be made whether a card is meh or not. As always, there are some good bets to make here. Let’s take a look at the UFC odds at BookMaker.eu and break down the Cherry Picks, Savvy Risks and Lottery Tickets.

Pennington is by far the biggest underdog on the card, and it’s not hard to see why. This feels like the men’s flyweight division, where the UFC is throws warm bodies into the cage to keep a dominant champ active. In this case, a four-fight winning streak was enough to qualify Pennington for a shot at Nunes.

There’s really not a single advantage that Nunes doesn’t hold, physically or talent-wise. She’s more athletic, more explosive and far more dangerous on the feet or mat. As a grinder, there’s an extremely slim chance she can drain Nunes’ gas tank, but that requires physically bullying her or going toe-to-toe like Shevchenko did. It’s tough to see that happening here.

This is the safest pick of the night, but the high price makes it nothing more than a parlay booster. We’ve seen Nunes school top-10 fighters, while Pennington struggles to put away outmatched fringe-ranked opponents. Think of this as a champ facing a journeywoman in a stay-busy fight.

Five rounds is a long time for Nunes to piece up Pennington, and the Brazilian can thump. But Pennington has never been knocked out despite eating some heavy hands in the past. Plus she has a talent of gutting her way out of tight spots. A small bet at this price is a good risk.

Gastelum needs to follow the blueprint that Robert Whittaker set. That means fighting off the takedowns and taking it to the Brazilian’s chin with quick, accurate shots. The 25-year old will have to use his speed, footwork and hands to outwork the bigger Souza. He’s got the tools and and a similar style, but can he rise up to the same level as the Aussie?

As for Jacare, he needs to watch tape of Weidman rolling up Gastelum. Souza is one of the most decorated BJJ practitioners to step into octagon, and turning this into a grappling match is his best chance at victory. He won’t be lost on the feet, as the Brazilian is an underrated knockout artist with sledgehammer fists. However, he blew his load trying to get Whittaker to the ground and had nothing left on the feet. Energy conservation will be key for the 38-year old.

It’s important to remember this is a three round fight, which gives the younger, more active Gastelum a chance to win two quick rounds. Souza might be a better BJJ artist than Weidman, but he’s not as good an offensive wrestler. Plus, he’s going to have to chase a faster fighter around.

The UFC is being careful with it’s super-prospect. Dern might be one of the greatest female jiu-jitsu artists of her generation, but she barely squeaked by Ashley Yoder – a tough but unremarkable vet. In hindsight, Yoder’s strong wrestling should’ve been a warning sign for matchmakers trying to make Dern look good. The 25-year old had trouble taking down Yoder, and her striking was ridiculously wild and inefficient.

It seems that a refined striker with good takedown defense would be Dern’s kryptonite. Cooper’s probably not the one. While she’s comfortable on the feet, the American uses her strikes to barrel into the clinch to dirty box and level change. Trying to do that against a grappling wizard would be suicide.

Somebody as inexperienced as Dern is risky, but Cooper’s 20% takedown defense isn’t going to cut it. As long as Dern doesn’t fall in love with her striking, this is her fight to lose.

Savvy Risk: Dern to win by submission at +135

Cooper is 3-3. Know how she lost all of her fights? By submission. That’s not a good sign against a girl whose won world championships in every major BJJ competition.

Belfort finally seems to realize that his trademark blitzes can’t finish guys anymore, and he needs to watch his gas tank if he wants to have anything after the first round. The problem is that without his KO power, he’s basically a tiger without teeth. It’s a sad reality, but post-TRT Belfort at 41 years old is deflated, slow and unable to take more than a few big hits.

Machida isn’t exactly young at 39 either, and he was finished brutally in his last three losses. He can’t take too much more damage either. But his gas tank is still intact, and that’s a big deal against an opponent who is regularly exhausted after hard exchanges. Though not as elusive as he once was, Machida’s bouncy karate stylings should be able to evade Belfort’s flurries.

Both guys are fighting more conservatively than ever, Machida’s evasiveness takes away Belfort’s knockout threat, and The Dragon’s own lack of punching power makes this fight unlikely to be stopped early. This should go past the second round.

Lottery Ticket: Machida by submission at +1575

Machida only has two submission wins in his career, but he is a BJJ black belt. While he’s not a killshot striker, he does have the ability to put guys down with a variety of strikes. At +1575, we can see him dropping Belfort and locking something on for a win.