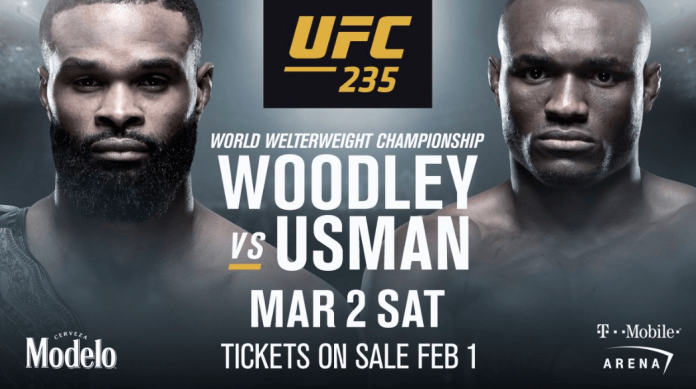 The forums are buzzing. The messageboards are lighting up. MMA Reddit is already producing a ton of self-made posters, lineup collages and fanboy posts for a monster UFC 235 card in March.

There are only a few cards like this a year, where every fight from the pay-per-view main card down to the prelims features fighters that bear watching. Of course, it starts with the main and co-main: Jon Jones is jumping back into the cage less than three months after shredding Alexander Gustafsson to win the light heavyweight belt for a third time, and Tyron Woodley continues his quest to dethrone GSP as the welterweight GOAT.

So that’s awesome. The UFC could’ve filled out the rest of the Vegas card with scrubs and called it a night. But this is one of those times where the promotion was just like screw it, we’re all in.

Ben Askren is finally making his UFC debut, against a Fight of the Year machine in Robbie Lawler. Zabit Magomedsharipov gets to test out his tsunami-offense against a legit featherweight contender in Jeremy Stephens. Ronda-Killer Holly Holm tests undefeated Aspen Ladd. Cody Garbrandt and his perfect hair fights for the first time since getting knocked out twice by archrival TJ Dillashaw. And it goes on and on.

Naturally, with such a sick card, a lot of the UFC odds at BookMaker.eu have already set opening lines. Check out the full lineup below (as we know it so far).

Is anyone surprised that Jones is such a big favorite? Smith gets a title shot solely on the basis that he’s the highest ranked dude that hasn’t been smashed by Jones already. He seems pretty peeved about the fact that nobody’s giving him a chance, and remarked that he can’t believe that people are writing this off as a first-round finish. While Smith is no tin can, it’s tough to think of any way – aside from a lucky punch – that he can pull this off.

The co-main is a lot closer, as Usman is only a slight ‘dog to take the belt of Tyron Woodley. The champ is fairly priced with the opening odds at -170. If you’re convinced that Woodley’s experience, and his killer right hand, gives him the win, you might want to throw down a bet right now because we see his price only getting more expensive from here.

Online oddsmakers love wrestlers. Being able to dictate where the fight takes place is a major advantage, and Askren is one of the best there is at doing that. Everybody loves Lawler, but he can’t throw down if he’s taken down at will. Askren’s -325 odds is nothing more than a parlay booster, while Lawler is a lottery ticket.

If Stephens opens as a big underdog, he’s worth a bet. Zabit’s hype train just hit ludicrous speed, and he’s stepping up against a legit, experienced bruiser in Stephens. It’s been fun watching Zabit try out all sorts of Kung Fu moves inside the octagon, but that don’t play near the top of 145 pounds.

Yup, it’s gonna be one of our biggest previews in a while – there are just so many fights on this card that’ll draw a ton of betting action. We’ll take a look at all the odds during fight week and pick out our best values, but you can already start betting the top three fights if you wanna get a head start. Also, remember to light some incense to the MMA gods to pray that everybody makes it to the card intact, and Jones refrains from taking tainted dick pills and stays away from the coco.