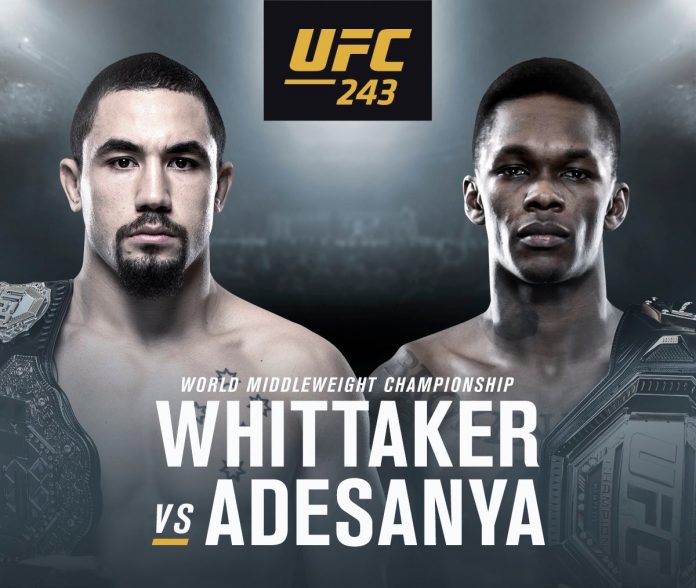 There can only be one…middleweight champion that is. Right now, Bobby Knuckles holds the title, but undefeated Israel Adesanya stepped up to win the interim strap while the Aussie was sidelined with a life-threatening injury. This Saturday, “The Last Stylebender heads to Australia – where Whittaker is a big star – in a highly anticipated unification bout.

While the main event marks Whittaker’s second title defense, it’ll mark his first championship fight against somebody not named Yoel Romero. The 28-year old won the vacant strap in a memorable 2017 encounter, and defended it in a rematch after Romero beat Luke Rockhold to earn a second shot while Whittaker was sidelined with injuries. Both matches were Fight of the Year contenders, and the champion battled back from serious adversity each time after getting sledgehammered.

Adesanya’s 17-0 record is impressive, but it’s not even the most exciting thing about him. The Last Stylebender (a rad nickname) has been compared to a prime Anderson Silva, and he’s got swag outside the cage for days. He’s got that “it” factor, and we could be looking at a future superstar. It also helps that he straight up schooled some good fighters in Brad Tavares and Derek Brunson, notched a convincing decision over Silva, and proved he could dig deep against Kelvin Gastelum.

The rest of the card is decent, with a lightweight bout between No. 6 Al Iaquinta and No. 15 Dan Hooker doing some heavy support duty. Like Whittaker, Hooker is a native Australian who should be a huge crowd favorite. Fellow Aussie Tai Tuivasa joins Whittaker and holds it down for the heavyweights against Sergey Spivak.

It should be a busy night at the UFC online sportsbook, so let’s check in with the fight odds at BookMaker.eu and break down your best betting options. As this article title suggests, we’re picking out bets where we see value in betting big, and a few other plays where it makes sense to be conservative. Adesanya’s scrap with Gastelum probably was a big reason why oddsmakers opened with Whittaker as a slight favorite. Kelvin was able to repeatedly get within range and pressure the interim champ with punishing interior combinations. In fact, the fight looked like it was 2-2 going into the final frame. Adesanya found an extra gear and poured on the volume, showing the requisite mettle to hoist the hardwood.

The thinking here is that Whittaker is a better version of Gastelum. He’s quick, powerful, possesses excellent footwork and boasts an iron chin. At 5’10”, the Aussie is nearly a half foot shorter than the 6’4” Adesanya, but the champ has no qualms weaving into range and unleashing powerful combinations. Adesanya needs space to be his best self, and Whittaker’s top priority will be taking that away.

While we love Whittaker’s heart, we simply like Adesanya’s tools better as an underdog. Going from Gastelum to Whittaker is a step up, but still a lateral move in terms of fighting style. We think that Adesanya makes some adjustments to better control the ranges and take the win.

If Whittaker can survive flush shots from the hulking Romero, he should be able to eat whatever Adesanya throws his way. Conversely, Adesanya has never lost and wore Gastelum’s sniper shots quite well. This should go to the judges scorecards. At 145 pounds, Hooker was a lumbering featherweight who alternated wins and losses for a few years. But when he moved to lightweight, something clicked when his cardio and durability noticeably improved, The Hangman evolved into a marchdown fighter who could apply a constant barrage of strikes to overwhelm opponents. All of a sudden, prospects were overmatched (goodbye Marc Diakiese and Gilbert Burns) and aging vets were physically outgunned (sorry Jim Miller).

Edson Barboza proved far too fast and explosive for Hooker, but Iaquinta does not possess the same type of speed and fast twitch strikes. Like The Hangman, Iaquinta is a pressure fighter, but he prefers to bait his opponents to throw first so he can launch counter combination. Iaquinta is also small for the division, but his long jab should help with the five inch height disadvantage in this tilt.

This will probably be an extremely competitive matchup, but we like Hooker’s value here. Overall, his strking seems more dynamic and does more damage strike-for-strike. Iaquinta’s loss to Cerrone showed that Iaquinta can be controlled at long range – Hooker can follow the same blueprint.

Tuivasa will be fired up in front of his home crowd to break a two-fight losing streak. His opponent, Sergey Spivak, is a step down from guys like JDS and Blagoy Ivanov, and Tuivasa should be able to be the old, aggressive self against a fighter that projects to be a mid-level heavyweight.