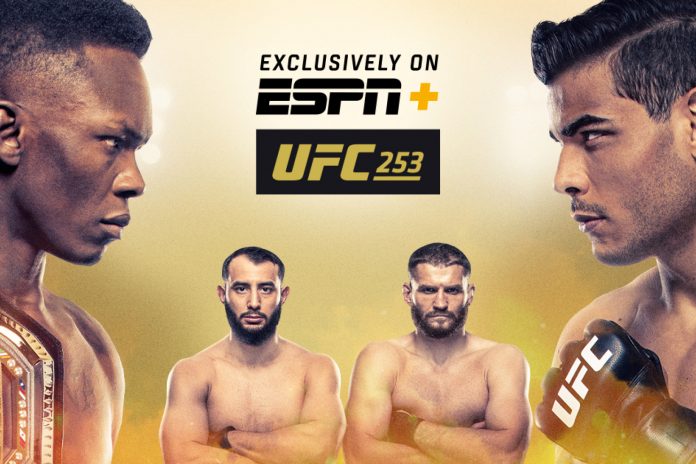 Pick your favorite storyline for this Saturday’s middleweight title fight between Israel Adesanya and Paulo Costa: somebody’s “0” has got to go. This is a legitimate grudge match between two dudes who really do not like each other. We’ve got an elite kickboxer going up against a fearless smashing machine.

Adesanya could use an exciting scrap after putting up an absolute snoozefest against Romero – fans are still salty about that one. The good news is that Costa will be all to happy to oblige. In fact, the Brazilian has gone to great lengths to goad the Kiwi into a brawl. We already knew that the champ had an excellent social media game, but Costa’s been surprisingly impressive in that area despite English not being his first language.

This is expert level trolling (skip ahead to the 3-minute mark):

Adesanya is too smart and too good to get into a slugfest, but Costa is going to march forward at all cost. That’s what makes this fight so fun.

In the co-main event, Dominick Reyes and Jan Blachowicz square off for the vacant light heavyweight title AKA Jon Jones’ scraps. That’s not the most flattering way to frame a championship matchup, but that doesn’t mean it’s not true. But this is not a deep division at all, so whoever walks out #andnew has a chance to establish their own legacy. Dominick Reyes is a heavy favorite in the online sportsbook, and he has the youth and physical talent to be a special fighter in his own right.

As usual, the UFC odds at BookMaker.eu offer a lot of great online betting options for both title fights. Let’s take a deeper look and break down the best bets.

This is a style matchup that plays right into Adesanya’s strengths as a counterstriker. When opponents try to force the issue against him, things have not gone well. Brad Tavares tried to pressure him and got tuned up. Derek Brunson swore to high heaven that he’d drag the “skinny” Adesanya to the ground and was knocked out inside a round. Robert Whittaker thought brawling would work and didn’t last two rounds. Kelvin Gastelum had some success inside the pocket, but was dropped three times in the fifth round after Adesanya caught his timing.

Costa’s entire identity is smashing dudes into submission – just look at how jacked he is. Not only does he have one-hitter quitter power, Costa is absolutely fearless. We’re still stunned that he had the cojones to walk down Yoel freakin’ Romero. One does not simply…walk down Romero.

It makes him ridiculously fun to watch, but it’s also going to be his downfall. Before Adesanya was a pro MMA fighter, he was already a special kickboxer. This is going to be a standup battle (neither man has attempted a takedown inside the octagon), and we’ll lean on Adesanya every time in that scenario. Costa’s frame and highlight reel is keeping the lines competitive, and we suggest you take advantage of the champ’s affordable price.

It’s not a cheap pick, but it’s the right one. Reyes carries major advantages that simply can’t be ignored. Physically, he’s just 30 years old compared to Blachowicz’s 37. He’s two inches taller at 6’4”. A former collegiate football star, The Devastator is a superb athlete that fell just shy of reaching the NFL. He’s younger, bigger, faster and more explosive than his opponent.

We’re not sure where Blachowicz can tilt this fight in his favor. The Pole is a more experienced grappler, but doesn’t have the wrestling to take down Reyes. His jab is criminally underrated and was basically all he needed to best the explosive Jared Cannonnier – but that’s not enough to overcome the height and speed disadvantage. Only a fool would underestimate a guy who has won seven of his past eight, but Blachowicz has never really seemed to scare anybody, and there’s good reason for that.

Plus, it just feels like Reyes’ time. There are tons of folks out there who feel like he deserved the win over Jon Jones. Take a second to think about that last sentence: Reyes was and is good enough to go toe to toe with the MMA GOAT. You can’t say that about Blachowicz.

We just spent the last few paragraphs praising Reyes, but his opponent is by no means a scrub. He was knocked out by Thiago Santos in 2019, but that marked the first time Blachowicz was stopped since 2011. As a savvy veteran with all-around skill, the Pole will likely avoid taking too much damage and make it to the scorecards.