Home Latest News UFC 254 Odds – Bet It or Forget It: Nurmagomedov vs. Gaethje 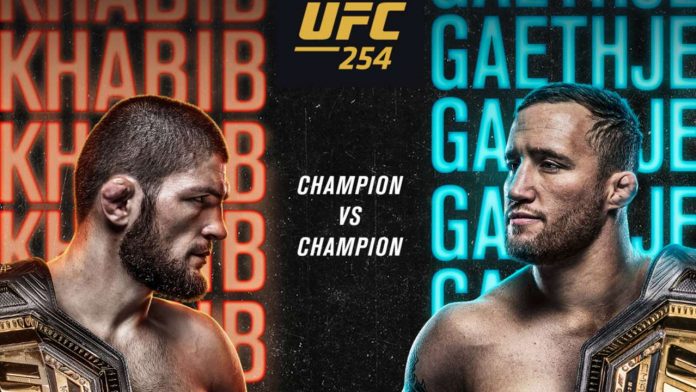 Khabib Nurmagomedov has reached hallowed ground – he is a living legend dominating his own sport. So good, that every time he steps into the cage, it’s a massive event. Facing the Russian inside the octagon is the MMA equivalent of meeting Lebron James in the NBA Finals, or meeting Tom Brady at the peak of the Patriots dynasty.

It’s not just that he’s the champion in the most stacked weight class. It’s more than being unbeaten in 28 pro fights. This is a guy that makes elite fighters look helpless – just ask Dustin “I can’t get this f*cker off me” Poirier or Conor “It’s only business” McGregor about it. You got McGregor out here trying to bait The Eagle by insisting that he won a round against him. The scary part is that it’s probably the only round that Khabib has ever lost.

When a champ is this good, the UFC has to somehow market every next challenger as “the toughest test yet”. But in the case of Dustin Poirier, the shoe fits. If you had to create a fighter in a lab specifically to beat Khabib, you’d max out the exact same skills that Gaethje already has: defensive wrestling, explosive striking and killshot power. Like the champ, The Highlight has spent a lifetime training in wrestling and has the collegiate accolades to prove it.

Just as importantly, Gaethje seems to have the right intangibles. He knows what works, and he sticks to it: leg kicks to chop down the trunk + power shots that nobody can endure for very long. To top it all off, Justin is one of the few guys that truly “go out on their shield”. Win or lose, he puts his opponents through the grinder. The prospect of Khabib facing serious adversity is worth the price of admission alone.

This will likely be the biggest fight of the year, and there are a ton of online betting options for you to get in on courtesy of the UFC odds at BookMaker.eu. Let’s break down the FightMetric stats and get into our picks. 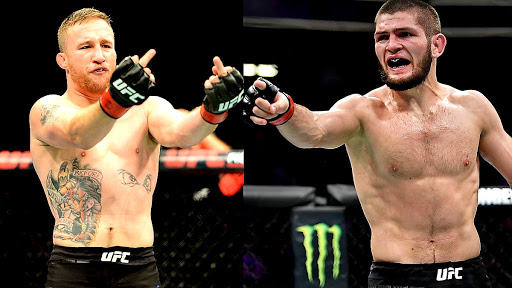 Forget it: Nurmagomedov to win at -347

We know what’s coming. Opponents know what’s coming. It doesn’t matter: Khabib is going to take his foes down and smesh them. Top contenders bring in Olympic wrestlers and drill takedown defense for months on end and are still powerless to do anything about it.

Reminder: Khabib is a generational talent in his prime. The most likely outcome is the most familiar one: The Russian drags this to the mat and keeps it there while going to town. The problem we have is with the money line. Any price under -300 is fair, but the current price of -350 is too expensive to justify, and it’s not such a lock that you can use it as a parlay booster.

Gaethje’s all-out style is just not sustainable for 25 minutes, and his last 11 fights have ended before the final bell. Though Khabib’s wrestling is the type of offense that eats up clock, he’s leveled up his ground game. Whether it trapping limbs, cranking the neck, laying down the GNP or chasing subs, Khabib never stops until his opponent breaks. He’s basically a Terminator that’s programmed to wrestle.

Between Khabib’s brutal ground game and Gaethje’s lethal standup, it’s safe to say this one ain’t going to the scorecards.

If you want a hedge play, then Gaethje to win by TKO is the smart pick. If you’re positive that Gaethje pulls off the upset, then do yourself a favor and go with this victory prop – it’s really the only way that he can win. The dude is straight up headhunter with an insane KO ratio. Also, do you think anybody is really equipped to win a decision against Khabib?

If Justin keeps the fight standing, the Russian is gonna go down swinging. A small bet could pay massive dividends and cover potential losses.