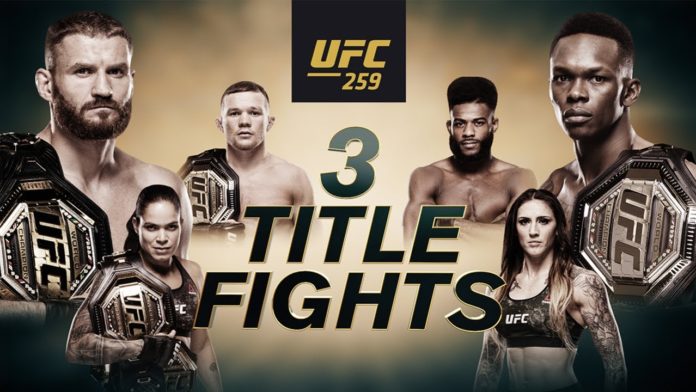 Count’em: three UFC title fights in one night. It doesn’t happen often – especially these days where pay-per-views usually only feature 1-2 fights we really care about. So enjoy it while you can since it might be a while until we see another tripleheader like this.

The headliner is all about Israel Adesanya. The undefeated middleweight champ is attempting to become just the fifth fighter in UFC history to hold titles in two different weight classes. But beyond that: how high can he rise? Stylebender is already one of the biggest stars in the sport – can he become a mainstream athlete a la McGregor or Rousey with a historic win? And can the perpetually overlooked Jan Blachowicz spoil the party, or is he just a speed bump in the Nigerian’s meteoric rise?

Speaking of double champs, Amanda Nunes puts her featherweight title on the line against Megan Anderson. The UFC really has no reason to keep the women’s 145-pound division intact beyond parading Nunes around as the women’s MMA GOAT. Which she is – there is no credible argument against that fact. While Anderson is tough, nobody is really expecting her to pull a Holly Holm here. This is a stay-busy fight for Lioness, and the UFC odds at BookMaker.eu reflect that.

Last but definitely not least is our bantamweight championship fight. Petyr Yan will make the first defense of his title against the surging Aljamain Sterling. If you’ve never seen Yan fight, he’s basically what would happen if Ivan Drago was shrunk to bantamweight size – a killer who bombs opponents with his fists until they wilt like soggy cornflakes. Aljamain Sterling’s well-rounded MMA game should be an interesting foil, but he’s also at risk of getting decapitated here.

Lots of bets to get into – let’s jump in and take a look at the bets to set and bets to forget.

While we do believe that Stylebender deserves to be a clear favorite, we don’t see value in this price. First off, the jump to light heavyweight is no joke: that’s a 20-pound weight difference. How will he carry that weight in a fight? How will he deal with the punching power of bigger opponents? Blachowicz might not be considered a killshot hitter, but four of his past five wins have come by TKO. That includes his last win over Dominick Reyes – a guy that went five rounds with Jon Jones. We’d like to see Adesanya’s line come up to the -225 range before we take the plunge.

Conversely, Blachowicz’ money line doesn’t pay out enough to justify the risk. If it moves up to the +250 range then we’ll reconsider. His patient, technical approach could very well frustrate Adesanya and lead to a closer matchup then the odds suggest.

We love the value on this prop. It’s not like Adesanya doesn’t have power, but he’s not the type that goes hunting for it. Where he shines is against ultra-aggressive fighters like Whittaker and Costa, where his brilliant counterstriking leads to early finishes. Against more conservative fighters like Romero, Izzy is content to play the long game. Blachowicz has finishing power, but we doubt he has the speed to land a finishing blow. The light heavyweight champ is an extremely measured fighter with a good chin, and we see him making it to the scorecards.

Forget It: Nunes or Anderson to win

LOL at the betting lines here. Nunes has reached the same stratosphere as prime Cyborg, Rousey, Jones and Mighty Mouse. Those fighters would regularly see money lines around -1000, simply because they were so far ahead of their divisions that any matchup was pretty much a stay-busy scrap. Nunes is getting the same treatment, and it’s plenty justified as she’s been crushing opponents.

At these prices, it doesn’t make sense to bet either fighter – unless you’re somehow convinced that Anderson has a chance to win. Spoiler alert: she doesn’t. Anderson is really only here because you can count the number of women’s featherweights on one hand and Nunes needs to fight somebody. Even as a parlay, betting Nunes barely moves the bottom line.

Nunes either ends fights in the first round or goes deep into fights. You might think that’s an overgeneralization, but that’s been the case for eight straight fights. Four of those have gone at least to round 5, and the other four ended in the first round. Anderson’s last four fights have ended in the first. So we like the near even money you can get on betting that this fight ends before the halfway point of round 2.

In full transparency, we’ve fallen in love with Yan. The Russian is young, hungry and nasty. He’s basically a boxing tornado, except that tornado is filled with barbed wire and sledgehammers. Sterling’s best shot is to take this to the ground, but Yan boasts an 87% takedown defense and knows how to make opponents suffer for even thinking about takedowns. With the volume that Yan piles up, with the power behind his punches, the Russian is going to pile up points with judges and likely take the victory.

At this price, we’ll take Yan all day – and wouldn’t be surprised to see him stay atop the 135-pound class for an extended period.