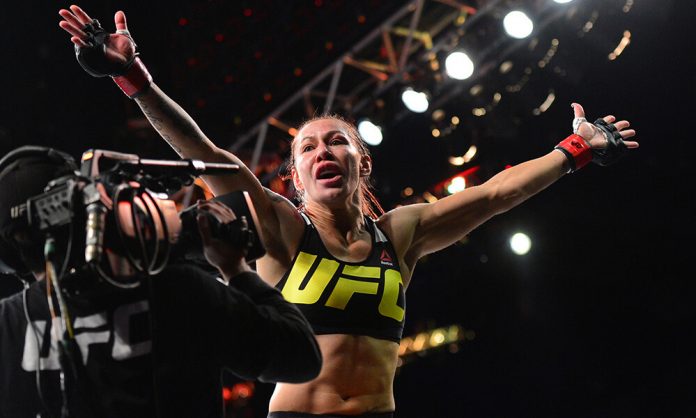 Let’s play a game of Would You Rather. The situations: waking up in a Saw trap, being a minority in a Hillary shirt at Trump rally or locking yourself in a cage with Cris “Cyborg” Justino for 25 minutes.

That should give you some indication of just how terrifying Cyborg is. Widely considered the top pound-for-pound fighter in women’s MMA, the Brazilian’s savage brand of violence has produced 14 KOs in 16 career victories. Unbeaten in 17 consecutive fights, no opponent has even come remotely close to offering any threat to her during that span.

Instead, they usually end up looking like the Final Girl of a Texas Chainsaw Massacre remake: battered, bloodied and in complete shock.

This Saturday, Cyborg will fight for the second time under the UFC banner, but this time she’ll carry the main event. She’ll be facing UFC newcomer Lina Lansberg at a catchweight of 140 pounds. We might as well start writing Lansberg’s eulogy right now.

Let’s take a look at your UFC betting options, with fight odds courtesy of BookMaker.eu.

No Surprises in These UFC Betting Lines

We rarely see such lopsided moneylines in the UFC, where official matchmakers ensure none of the resume-padding nonsense in boxing. But Cyborg is an exception to the rule. In her last bout against Leslie Smith this past May, the Brazilian closed as a -2000 favorite. In January, she entered fight night at -3000 against Daria Ibragimova. Before that, the Brazilian closed at -3050 for an Invicta title defense against Faith Van Duin.

Where Does Cyborg Fit?

Much of this has to do with her competition – there simply aren’t that many world-class opponents at featherweight. Instead, the majority of great women fighters are one weight class below at 135 – where Ronda Rousey, Valentina Shevchenko, Holly Holm and champion Amanda Nunes reside. But those 10 pounds might as well be 1000 in Justino’s case.

Despite her best efforts, Cyborg has repeatedly stated that cutting to 135 would endanger her life. Even the drop to 140 is exceedingly brutal – backstage footage prior to the Smith fight showed a sobbing Cyborg struggling to dehydrate her body to dangerous proportions.

None of this is the her fault, but she remains a fighter without a division in the UFC. And why would any of the premier bantamweights move up in weight to take such a dangerous fight and possibly damage their own careers? We can’t definitively say they are ducking Cyborg, but the fact that none of them have signed on the dotted line for so long only adds to the Brazilian’s mystique.

Does Lina Lansberg Have a Chance?

You have to give the Swede credit for taking a fight that many of her (much) more accomplished peers have avoided. To her credit, she is 6-1 with four knockouts. On top of that, she has upwards of 90 pro Muay Thai fights on her resume. That includes a championship bout against current contender Valentina Shevchenko, who just upset Holly Holm in July.

Obviously, she’s a good striker. But counting on her striking against a certified Muay Thai killer like Cyborg is is a death wish. That’s like me challenging Steph Curry to a three-point contest on the basis that I can stroke a few threes in pickup games.

The only conceivable option that Lansberg has is taking Cyborg into deep water in hopes that the weight cut will leave her completely drained. It’s definitely a viable strategy, but it would take a durable, experienced fighter to survive the early onslaught. Somebody with Miesha Tate’s toughness or Holm’s elusive movement.

But Lansberg doesn’t have those things, nor does she have much experience against top opponents. Instead, she’s stated that she thinks her kickboxing will suffice, and that she’ll open up Cyborg with strikes. I don’t think anyone sees that really happening.

Cyborg to win is a given with these UFC odds, but considering how expensive she is, you’ll want to parlay that pick with another bet. The under at 1.5 rounds offers a little better payout, and though Justino was much more patient in her UFC debut, her unfair power was still very much intact.