What happens when a Muay Thai master (that’s an actual rank) meets an American kickboxing champion? We’ll find out this Sunday when Liverpool’s own Darren Till defends his hometown against Stephen “Wonderboy” Thompson. The match-up serves as the main event of UFC Fight Night 130.

It’s a pairing with a ton of title implications. Thompson is the just one fight removed from back-to-back title shots and the current No. 1 contender at 170 pounds. If Till finds a way to pull off the upset, that’s a strong case for a shot of his own. Wonderboy likely won’t ever fight champion Tyron Woodley again, but keeping his name in that top slot ensures he’d be the guy against anyone else who happened to get a hand on their strap.

Title talk aside, man what an awesome fight. Basically we’re getting a scrap that you could put on the set of a Bloodsport remake, with two badass kickers raising a hurricane of flying feet. Till’s been calling for Thompson since obliterating Donald Cerrone, apparently infuriated with the fact Wonderboy is generally considered the division’s best kickboxer.

Also on the card is Arnold Allen, a 12-1 Englander whose hoping to become another prospect in a ridiculously stacked featherweight division. We’ve also got Jason Knight AKA Hick Diaz, who will try and break a two-fight losing streak against an action fighter in Makwan Amirkhani.

Pretty sweet for a Fight Night card, and as usual there are some great bets to make. Let’s take a look at the UFC odds at BookMaker.eu and get to it. 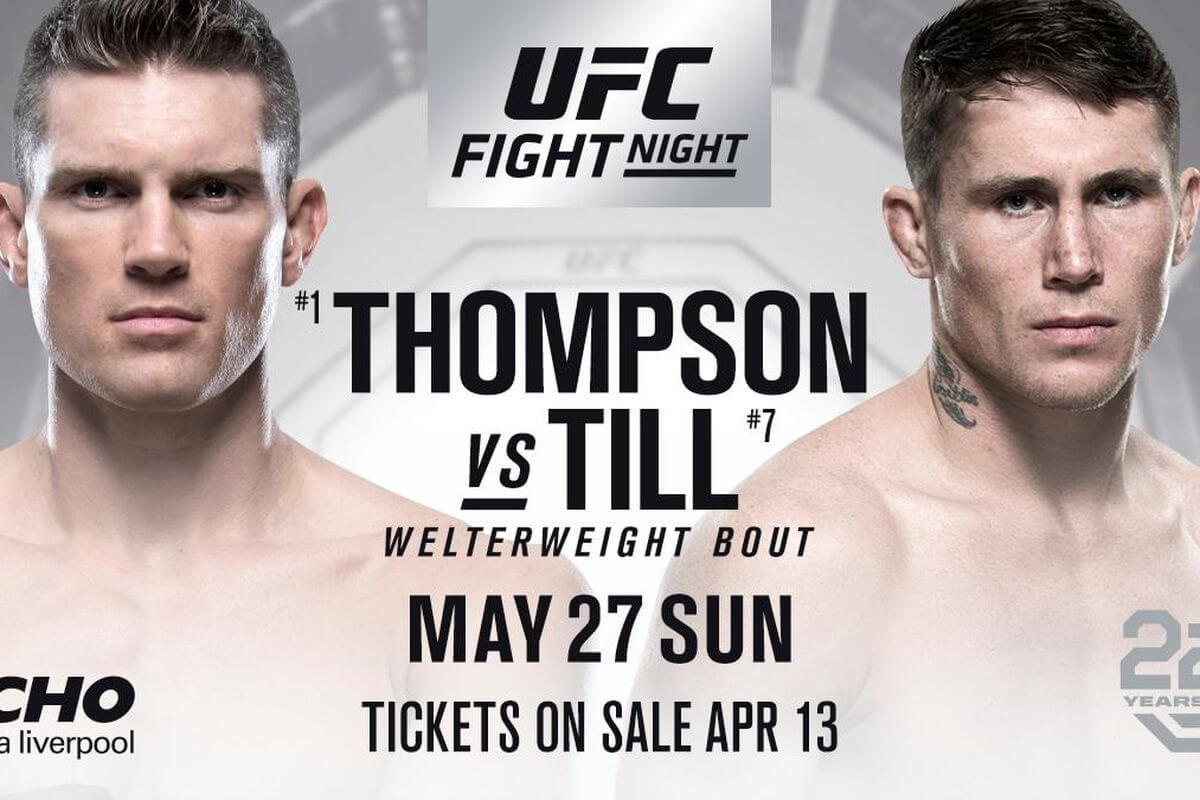 It’s hard not to hop on the Till bandwagon after he humiliated Cerrone, but Thompson is a huge step up. For starters, you can’t overwhelm the American on the feet – his bouncy stance and lateral movement is just too good to get trapped against the fence. Wonderboy’s also schooled some very good strikers in Jorge Masvidal, Rory MacDonald and current middleweight champ Robert Whittaker.

Till’s win against Cowboy was nice, but beyond that none of his opponents can even be considered upper tier guys. Jumping from a past-his-peak Cowboy to a No. 1 contender in his prime – one with elite striking skills – is a huge task. Can Till dial his game up against a guy he won’t be able to bully? We don’t see that happening.

The floodgates have opened, and TIll has gone from a +120 ‘dog to a -130 favorite. In the same time Wonderboy’s price has shot up from -165 to -101. That’s insane! We don’t know what’s driving the confidence on the Brit, as his only real top-level opponent was a fading Cowboy. Getting a 100% return on Wonderboy is just too good to pass up.

Think of this as a kickboxing match – both guys aren’t offensive wrestlers and they have excellent takedown defense. Given their pro striking backgrounds, they should feel right at home sparring for five rounds. Seven of their last eight combined fights have also gone the distance. 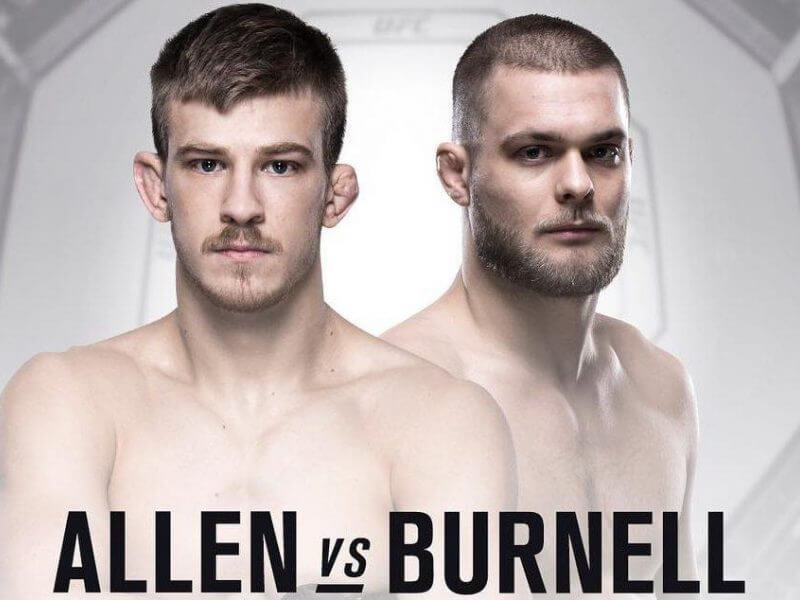 Two 24-year olds throw down for the chance to fight a ranked opponent in the future. Both are relatively new to the UFC, so it’s difficult to gauge their ceilings in the big show. We do know that Burnell is a hyper-aggressive grappler, and he loves to cause scrambles to force mistakes to capitalize on. He’s a bit one-dimensional, but is good at what he does: takedowns and top position control.

Allen has got all the right tools. He’s a very good athlete, quick on his feet, explosive in his movements and can keep a high pace. Now he’s just got to put it all together and evolve into a fighter that imposes his game. The kid is full of confidence, but his willingness to challenge opponents everywhere also forces him to take the toughest path to victory.

We’re going by the eyeball test here. Burnell is a good scramble-grappler, but his offensive wrestling isn’t good enough to consistently take down an uber athlete like Allen. The Brit’s ceiling appears to be much higher, and that should be enough against a similarly experienced opponent. 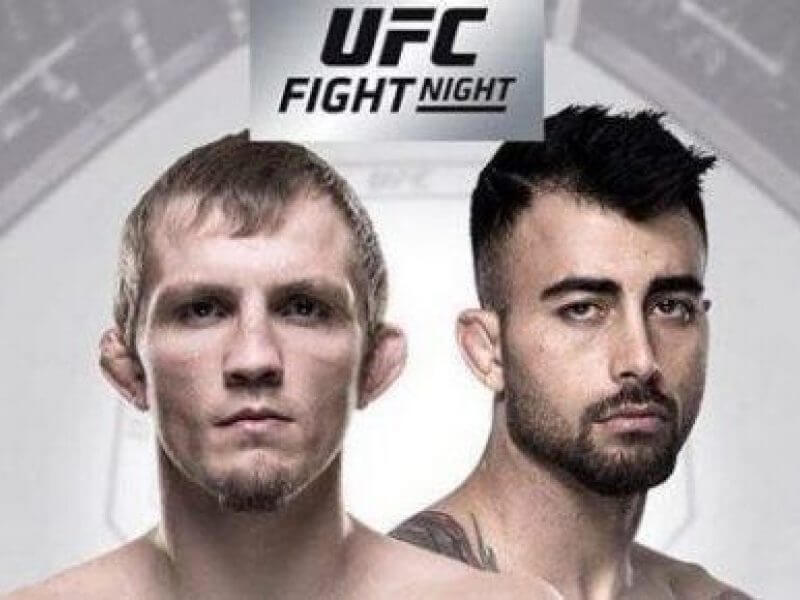 Knight got thrown to the wolves too early. Ricardo Lamas schooled him, and he was further exposed against Gabriel Benitez. That loss to Benitez was especially eye-opening, as Knight couldn’t seem to do more than charge forward and wing haymakers. Benitez took advantage of his predictability and pieced his face up into ground meat.

The mean-mugging Mississippi native has got to learn that he can’t just press forward and expect to break guys. If he tries that against Amirkhani, it’s gonna be a long night. The SBG Ireland product is a phenomenal athlete with dynamic striking and punishing wrestling. Knight’s knack for submissions and boxing is what drew the Diaz comparisons, but like the Stockton bros he can be controlled on the mat and tuned up by patient, technical strikers.

Even if Knight fights smarter, he’s still dealing with a faster, more explosive fighter who can challenge him an every phase. Plus the Finnish fighter’s got the wrestling advantage to fall back on. We love the underdog price you can get on him right now.