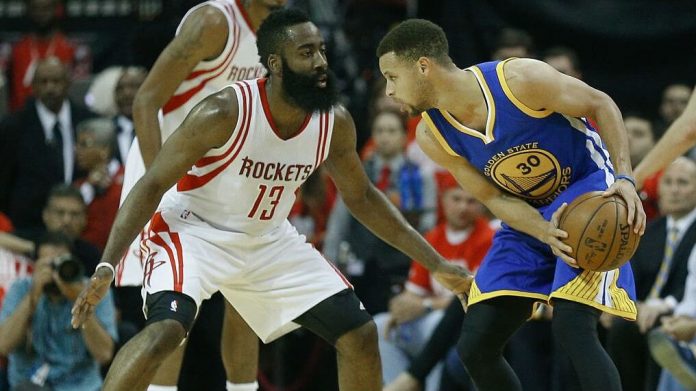 The Houston Rockets responded like a championship team to even the Western Conference Final at two games apiece. They worked hard all season to get homecourt advantage for a possible series with the Golden State Warriors, and they stole it back from the defending champs with a dramatic win on Tuesday. The Rockets didn’t let their 41-point beating in Game 3 get them down, overcoming a double-digit deficit to start the fourth quarter to eke out a 95-92 victory.

With all the offensive firepower on the floor, it was Houston’s defense that helped end the Dubs’ NBA record 16-game home playoff winning streak. The Rockets allowed just 12 points in the final quarter on Tuesday. The Rockets earned homecourt advantage, now it’s time to do something with it. LeBron James isn’t about to let the Cavs’ run end. The King led his team to a pair of homecourt victories to knot the East final at 2-2. Boston doesn’t have to win a road game in the series, but they need to win at home, where they are undefeated this postseason.

Just like the Rockets weren’t fazed by their 41-point loss in Game 3, don’t expect the Warriors to be overly concerned with their fourth-quarter meltdown on Tuesday. The Dubs don’t lose when leading by 10 points in the final quarter – at least not until Tuesday. Everything was going right for Golden State as they attempted to build a commanding 3-1 series lead. The best third quarter team in the league was at it again, scoring 34 points to erase a 7-point halftime deficit, and the Dubs had the Rockets on the ropes leading 80-70 entering the fourth. But the Dubs managed just 12 points in the final quarter and they missed their last five shots, opening the door for Houston to steal back homecourt advantage.

As good as the Rockets are offensively, they knew defense would be a key in beating the Warriors. And in the most important game of the season, the Rockets came up with their best performance. Mike D’Antoni shortened his bench and the seven players gave maximum effort in the win. James Harden and Chris Paul provided the offense, scoring 57 points between them, and everybody played defense. They held the Warriors to 39.3 percent shooting and allowed just nine three-pointers. The Rockets also forced 16 turnovers to hold the Dubs to fewer than 100 points for the first time in nine games while cashing the under for the third time in the four series matchups.

12 – On good days, which there are many, the Warriors can score 12 points in the blink of an eye. However, their inability to score more than a point a minute in the final frame proved costly to the league’s most efficient offense. Houston knew it had to play defense against the Dubs, and their fourth quarter was a masterpiece. The Rockets forced more turnovers than the Warriors made baskets in the pivotal frame, holding the Dubs to 3 of 18 from the field and 0 of 6 from three-point range. The defensive stand allowed Houston to pull out the victory and even the series.

We finally got a close game in the series and it was a doozy. A 3-1 series deficit would have been crippling for the Rockets’ chances and they came up with a sparkling defensive effort. The Warriors missed Andre Iguodala, who sat out with a leg injury, and Steve Kerr said his team looked “tired” in the fourth quarter. We don’t know Iggy’s status for Game 5, but the Dubs are certainly pushing to have him ready. The Rockets felt they needed any advantage to beat the Warriors in the postseason and having homecourt is one. They reclaimed it by winning in Oracle and they don’t want to give it back.