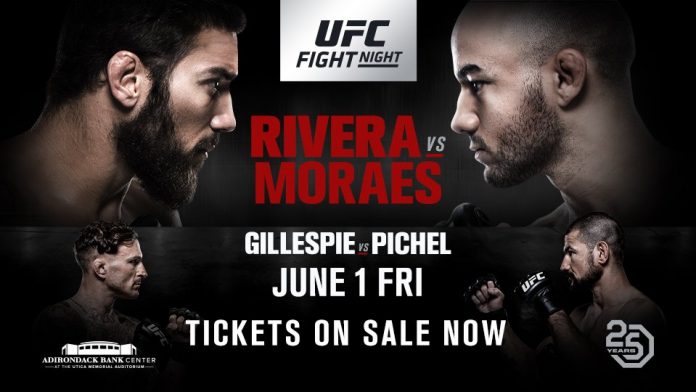 This Friday’s UFC Fight Night 131 in Utica, New York is definitely on the lower end of cards – especially after the excellent Fight Night cards we’ve had recently. It was a good run, but Sean Shelby can’t stack every event with popular draws.

That’s not to say that this card is bad, but there’s really not too much to get stoked about here. The main event could decide the next bantamweight title challenger, as Jimmie Rivera and Marlon Moraes are both top-5 guys at 135 pounds. Rivera is about as under-the-radar as somebody on a 20-fight win streak can get. Moraes is still trying to make a name for himself in the octagon as a recent WSOF signee.

The co-main features undefeated Gregor Gillespie, one of the brightest prospects in the lightweight division. Just getting noticed in a shark-infested division like 155 pounds is tough enough, but Gillespie has quickly become a guy to watch. His matchup with 11-1 Vinc Pichel should be another showcase of his immense talent.

Also on the card is Daniel Spitz, a 6’7” heavyweight looking to rise up the ladder in a thin division. “Daddy Long Legs” has a tough test against Walt Harris, a huge gatekeeper with athleticism and a 100% KO ratio. A welterweight matchup between Jake Ellenberger and Ben Saunders should be a short, explosive affair.

As usual, there are some solid betting values for the night. Let’s take a look at the UFC odds at BookMaker.eu and get into it.

Oddsmakers have set extremely competitive odds, resulting in what amounts to a pick’em. We can see why Rivera is a slight favorite: on top of being an excellent pressure puncher, “El Terror” has shown the ability to use his wrestling as needed to win close scraps. While the lack of KOs might throw you off, Rivera hits hard and throws in bunches – 4.55 significant strikes per minute is an elite number.

Moraes is a black belt in Muay Thai and BJJ, so he’s comfortable wherever this fight ends up. We have to address how crazy this dude’s leg kicks are; they’re right up there with Edson Barboza and Justin Gaethje. As the taller fighter, he’ll have to keep Rivera out of the pocket to set up his strikes effectively. But if he establishes that leg kick, it opens everything up.

Both lines are in play here, so picking a winner doesn’t have to be influenced by the odds. We like Rivera’s ability to mix it up on the feet and put it on the mat when he needs to. In a five-round fight, that wrestling is gonna pay off.

Gillespie certainly has the pedigree for success: a four-time All-American and an NCAA champion. He follows a long line of decorated collegiate wrestlers like Daniel Cormier, Ryan Bader, T.J. Dillashaw and Yoel Romero. We’ve already seen him take guys down and grind them into fine powder. The scary part is that he’s developing knockout power – two of his last three wins have come by way of knockout.

Pichel is also a wrestler who can throw bombs. The 35-year old’s 11-1 career record includes 8 KOs, so you know he can turn the lights out. The problem is that Gillespie’s ceiling is so much higher. Injuries have limited Pichel to five fights in four years, and he hasn’t been dominating midcard fighters like his opponent has.

Our Pick: Gillespie inside the distance -114

If you want to play it safe, just parlay Gillespie to win. But for the value, taking him inside the distance is a solid payout as a prop. There’s a very good chance that Gillespie takes him to the woodshed – he’s that good.

Spitz is getting some love as a young prospect, and Harris’ unimpressive 10-7 record helps. There’s a lot to like about a 28-year old, 6’7” heavyweight who moves well for his size. “Daddy Long Legs” has the tools to become a top-10 fighter in a thin division, but he’s got a long ways to go, particularly on the feet.

It’s hard to pinpoint exactly why Harris hasn’t done better in the UFC. He’s gigantic, athletic and explosive. Even at 34, he’s got the dexterity to kick high, launch flying knees and throw leaping punches. Plus, he’s a former Golden Gloves boxer with excellent takedown defense. That all comes with a huge caveat though – Harris’ stamina drains quickly.

It’s hard to see the leaner Spitz taking down the barrel-chested Harris, and that’s where he does his best work. He might be able to outpoint him on the feet, but Harris’ dynamic striking makes that unlikely.

Ellenberger is just 2-7 in his past nine fights, but check out the guys he’s been losing to: Jorge Masvidal, Stephen Thompson, Kelvin Gastelum, Robbie Lawler and Rory MacDonald just to name a few. He hasn’t been losing close fights though – he’s been getting murdered by a murderer’s row. Though he’s just 33, Ellenberger has aged quickly.

Saunders is a huge step down, but Ellenberger’s chin is all but shattered at this point. Saunders is a pressure fighter who can’t take too many hits either, but he benefits from having faced far lesser competition. He’s just taken less damage at this point.

Saunders might be two years older than Ellenberger, but he’s way younger in fight years. A few years ago, we’d take The Juggernaut to smash through Killa B, but his punching power is fading just as fast as his damage meter. Saunders can bring more firepower and taking heavier fire in return – the fact that he’s the ‘dog here makes this a great bet.