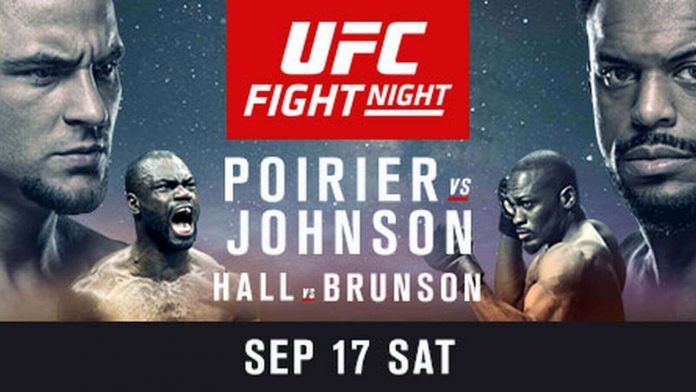 This Saturday’s UFC Fight Night 94 may be absent of big stars, but it’s got plenty of recognizable names and up-and-coming fighters to pique your interest.

In the main event, Dustin Poirier will look to continue his ascent up the lightweight ranks against the well-rounded Michael Johnson. And human highlight reel Uriah Hall is back in action in the co-main against the underrated Derek Brunson.

They’re the most meaningful fights of the night, and that’s where most of the UFC betting action will take place. Let’s take a look at your wagering options and the UFC odds.

It used to be that struggling fighters would drop down a weight class in hopes of reviving their careers against smaller opponents. But Poirier is following a recent trend where guys are going up in weight to avoid brutal weight cuts and preserve stamina.

So far, so good for “The Diamond”, who has racked up four straight wins in his return to 155 pounds. His last two victories also secured his No. 9 ranking in the UFC’s most loaded weight class. The Louisiana native scored a dominant upset victory over prospect Joe Duffy at UFC 199, then starched a highly regarded Bobby Green in one round at UFC 199 this past June.

Both those fights showcased Poirier’s best weapons: wrestling and punching power. What’s more, the 27-year old has evolved as a fighter. He’s no longer the athletic brawler from back when he made his UFC debut at 21 years old. Against Duffy, he demonstrated patience and the ability to stick to a highly tailored gameplan. The knockout of Green showed us that he still has the power to win a firefight.

Against a well-rounded fighter like Johnson, Poirier will need to be bring all of his tools. “The Menace” is a fine athlete with a good boxing game. Under Henri Hooft, he’s developing into highly competent striker, and his quickness makes him difficult to hit.

But Johnson’s fight IQ can be questionable, as Nate Diaz was able to take him out of his game with a steady stream of trash talk. There really isn’t much creativity in his offense either – you’ll rarely see him switch up tactics and mix in takedowns with his boxing.

In this five-round main event, you should favor Poirier’s more cerebral approach. He makes notable adaptations during fights, and that flexibility should allow him to outmaneuver Johnson’s more predictable style in a 25-minute encounter.

Maybe one day, Uriah Hall will capitalize on his bottomless potential and become the title contender that everyone was expecting since his days on The Ultimate Fighter. We’ve all been tantalized by his Matrix-style knockouts, and his jumping spinning back kick that put away Gegard Mousasi will live on forever in UFC highlight reels.

Hall is unquestionably one of the most dangerous, exciting strikers in the world. But when opponents oblige him in a kickboxing match, the result is tepid performances like his snoozefest against Rafael Natal. Dana White even publicly questioned Hall’s desire as a fighter.

Although Brunson is coming into this matchup on the strength of three straight knockout wins, he’d have to be crazy to think that he can be successful against Hall in a sparring match. Luckily for Jackson’s MMA product – and unfortunately for the fans – Brunson is a guy that’s no stranger to winning by wrestling to decision.

Many of his early wins came by way of lay-and-pray. And that’s putting it politely. In MMA forums this style of fighting is called “wrestle-humping.” You gotta love the internet sometimes.

In this matchup, Brunson’s wrestling background will be the difference maker. If he’s serious about taking the easiest path to victory, he’ll avoid striking altogether and shoot for takedowns at every opportunity. Hall is athletic enough to fend them off early, but it only takes a few before his will visibly begins to fade.

Check out more fight odds for this weekend at Bellator 161: Fight Odds and Preview