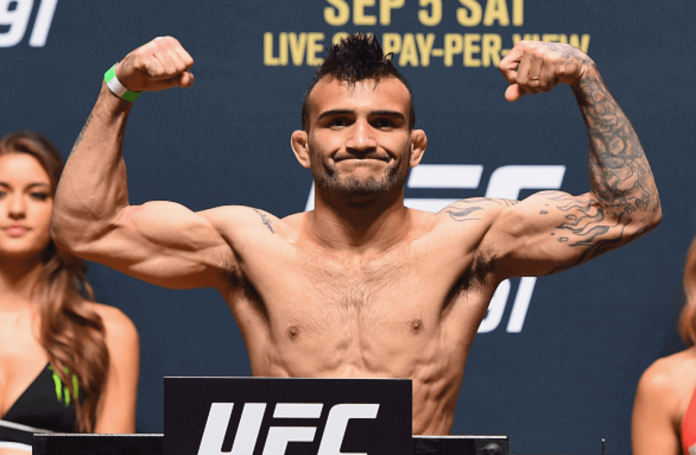 Think that little guys can’t hit hard? John Lineker and John Dodson are two explosive knockout artists – and stand just 5’2” and 5’3”, respectively. And this Saturday, they’ll square off in what should be blinding exhibition of speed and power.

It’s an exciting matchup in a division that has had trouble producing marketable stars. But in the sport of cagefighting, bone-crushing KOs speak louder than anything else. It’s highly likely that a title contender emerges from this high stakes matchup.

It’s understandable that Dodson is the favorite – he’s a two-time title challenger while Lineker has never fought for a strap. Still, this is about as close to a toss-up as it gets, with Lineker even money at +100 and Dodson at -120.

In regards to the round total, this five rounder is split right down the middle with an over/under at 2.5. Both the over and under in these UFC Fight Night odds are set at -110, which pretty much indicates that oddsmakers aren’t really sure how long this fight will go.

The Case for Dodson

“The Magician” might be the best athlete in the UFC. At 5’3”, he’s got blazing quicks, both in terms of movement and fast-twitch muscle. His athleticism makes him near impossible to take down, especially early on in fights. But it’s doubtful he will need to go to his sprawl much against Lineker, who very much prefers a strike.

Dodson’s ability to launch counters will serve him well against a pressure fighter like Lineker. Though a bit awkward in space, with stiff movements and off-beat rhythm, the 31-year old is absolutely deadly when it comes to slip and rips. His hand speed is astonishing even in slow-motion replays.

You can give a slight edge to Dodson in speed and athleticism – and that’s important. Combined with his knockdown power, it’s enough to make him a slight favorite in the sportsbook. Let’s not forget that he trains at Jackson-Wink, who tailor the best gameplans in the business.

The Case for Lineker

Like Dodson, the 26-year old Lineker moved up from 125 pounds looking to benefit from an easier weight cut. So far, it’s working out spectacularly. He appears far better conditioned, and the extra energy let Lineker be even more aggressive than he was as a 125-pounder.

The additional cardio is essential to his pressure style, especially since he throws almost nothing but power shots. Usually, throwing nothing but explosive strikes will quickly drain a fighter’s reserves, but that hasn’t been the case since Lineker moved to bantamweight. This dude can go hard for three straight rounds.

One of the best parts of Lineker’s game is his body shots. Perhaps nobody commits more to sending fist to ribcage than Hands of Stone. We’ve literally seen opponents hands slowly drop as more and more land throughout a fight. That’s exactly what he waits for, exploding with one of his trademark hooks when defenses are lowered.

The two are so evenly matched that the smart UFC betting here is on the underdog. In this case, it’s Lineker at +100. The safest bet, however, is the over on 2.5 rounds at -110. Neither man has ever been knocked out, and it’s only slightly more expensive than Lineker to win.