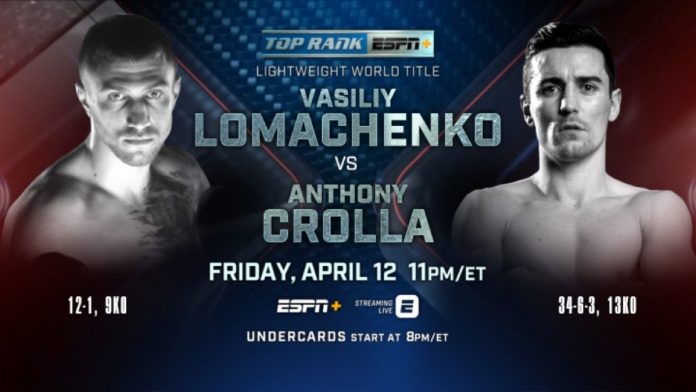 The odds don’t get much bigger than this for a defending champion to retain his boxing title. Vasyl Lomachenko will put his WBA, WBO and The Ring lightweight titles on the line against Anthony Crolla this week but is widely expected to defend all of them.

Lomachenko has put together an ultra-impressive career and will aim to continue it in this showdown. He is in his prime and ranked as one of the best pound-for-pound boxers in the world. He will aim to make quick work of Crolla.

The oddsmakers have listed Lomachenko as an incredible -5151 favorite to win this fight, odds so big that it barely makes sense to wager on him. The more intriguing bet asks how many rounds this bout will go. The over/under is 9.5 rounds, with the “under” listed as the -265 favorite while the “over” comes in as the +200 underdog.

Lomachenko has a career record of 12-1 with nine victories coming via knockout. The lone loss of his career came in his second professional fight when the 31-year-old fell to Orlando Salido by split decision in March of 2014. He has completely bounced back and elevated to one of the most impressive boxers in the world. Lomachenko captured his first lightweight championship belt on May 12th of last year with a 10th-round technical knockout of Jorge Linares. He followed that up with a unanimous decision victory over Jose Pedraza in December, adding the WBO lightweight title to his successful defense of WBA and The Ring belts.

Lomachenko is known for his impressive hand speed as well as his movement skills around the ring. He has a decorated career and will look to keep it going against a foe that few think can adequately match up against him.

Crolla comes into this title fight with a record of 34-6-3 in his career with 13 wins by knockout. Right away the mismatch is obvious as Crolla does not have nearly the same overall success, and the lack of punchout power has kept him from being an elite boxer.

Crolla does come into this bout on a three-fight winning streak. He won a unanimous decision bout over Ricky Burns in October of 2017, followed that up with a unanimous decision win over Edson Ramirez in March of last year and defeated Daud Jordan by unanimous decision once again last time out in November. Crolla’s most recent loss came in a bout against Jorge Linares for the WBA and The Ring lightweight titles on March 25th, 2017. He has another championship fight lined up and is hoping for a better result, but his chances of a win are microscopic.

Crolla’s odds of winning this fight are minute, but really, there is no sense in backing Lomachenko at this price. The payday is not worth the risk. Crolla could always land a miracle punch, and it would pay off unbelievably well. Root, root, root for the underdog in this bout, despite the vast unlikelihood he comes away with the victory.

Check out the latest Lomachenko vs Crolla fight odds available.