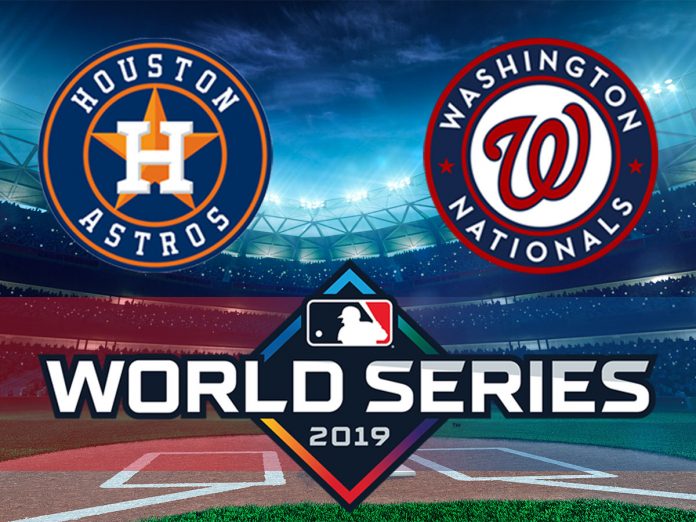 Two of the most storied franchises in baseball history went down in the Championship Series round of the MLB playoffs as both the New York Yankees and St. Louis Cardinals are now left watching the World Series from home as the Houston Astros and Washington Nationals prep for a World Series showdown set to start on Tuesday night. The Nationals are looking for their franchise’s first title in this one, but it’s Houston with all the pressure as they come into action as the heavy favorites.

The District of Columbia hasn’t seen a team in the World Series since 1933 and hasn’t had a team win it all since 1924. Obviously, both of those came well before the Nationals moved to town from Montreal. In fact, both came not one, but two franchises ago.

Until this year, Washington had failed on multiple occasions to even advance past the first round of the playoffs. Winning the NL Wild Card game was the first time this team advanced in the postseason and the NLDS victory over the Los Angeles Dodgers handed the franchise its first postseason series victory.

Given where this team was in mid-May and how they’ve already accomplished more than any other Nationals’ team, they’re essentially playing with house money at this point, making them dangerous as the expectations are all on the shoulders or the Astros.

Speaking of Houston, this is the second time in three years, they’ve beat the Yankees in the ALCS to get to the World Series. The toppled the Dodgers in a thrilling Fall Classic in 2017. They’re now looking for their second title in three years and enter playing as huge favorites. Can they live up to the expectations?

Of course, to even get to the Fall Classic you must be hot. Both teams rolled into the playoffs playing well down the stretch and have continued that throughout October.

The Astros and Nationals were the best offenses in their respective leagues in the second half of the season. Houston scored 462 runs and posted a staggering .887 OPS while the Nationals scored 433 with a .832 OPS in a league where pitchers hit.

Here in the playoffs, both offenses have been okay. Houston’s seen several players struggle with Yuli Gurriel, Yordan Alvarez, Carlos Correa, and George Springer slumping. Gurriel’s .209 postseason average is the best of the bunch, but he’s got a disappointing .541 OPS in his 11 playoff games.

Despite the collective struggles, Houston’s managed to get the key hit when needed. Correa, for instance, has just seven hits, but two have been huge, well-timed home runs. He’s driven in six. Gurriel has eight RBI despite only nine hits.

On the top end, Martin Maldonado is hitting reasonably well as is Alex Bregman, though to this point, Jose Altuve has been the teams’ offensive savior going 15-for-43 with five home runs and a 1.184 OPS. That’s some dominance. On Washington’s end of things, Antony Rendon is carrying the load, though Juan Soto has had some solid at bats and key moments as well. Howie Kendrick was named the NLCS MVP and has a .815 postseason OPS as a key middle-of-the-order hitter and difficult at-bat each time up.

Based on the names and regular season numbers, Houston has the advantage at the plate, but Soto and Rendon can match up with any two Astros, the issue is the other options the Astros have. Fortunately for Washington, however, several key players are struggling to find consistent at bats for Houston while Washington may not quite have the epic top-end talent, but has seen the lineup, top-to-bottom, deliver a bit steadier production this October.

This could be one of the best pitched series—at least from the starters’ perspective—we’ve seen in years as Houston and Washington boast two of the best, and most top-heavy, rotations in baseball.

Each team has three ace-level starters lined up each to go twice in this series though Washington may also turn to some of its arms in relief which could impact them on days they start. Regardless, this is truly a matchup of great rotations.

For Washington, they’ve got Max Scherzer, Stephen Strasburg, Patrick Corbin, and Anibal Sanchez. Sanchez seems like the weak link, but in two postseason games, he’s thrown 12.2 innings and allowed just one run on five hits and three walks while striking out 14.

In the regular season 3.85 ERA was the worst of the group, but still solid given his 119 ERA+ ranked him 19-percent better than the league average arm.

As for the other three, Scherzer and Strasburg are throwing well this postseason though Corbin has had some issues. All three are strong strikeout arms and truly dominant pitchers. Scherzer is a proven postseason arm and Strasburg is quickly turning into one of the better postseason pitchers of this generation. He now has a 1.10 postseason ERA in seven games. In 22 innings this year, he has a 18 hits and 33 strikeouts with just one walk and five total runs—four earned—allowed. Scherzer has allowed four runs in 20 innings with a .134 batting average against this October.

Like Washington, Houston has seen one of its big three struggle a bit. Greinke has a 6.43 ERA this postseason and his career postseason numbers aren’t all that inspiring either. He’s a bit of a question like Corbin, but in 10 starts for Houston after his trade from Arizona, he did go 8-1 with a 3.02 ERA. That’s hard to ignore.

Cole and Verlander were better this postseason and ended the regular season, the two top contenders for the AL Cy Young Award. Cole led the way in strikeouts with 326 in 212.1 innings. He had a 2.50 ERA and 20-5 record while Verlander was 21-6 with a 2.58 ERA. Here in October, Verlander is just 1-2, but has pitched well in four starts. Cole’s been nearly unhittable in three outings. He’s struck out 32 in 22.2 innings, allowing only one run and 10 hits.

The potential weakness in the Houston rotation is the Game 4 starter. Wade Miley was the No.4 starter in the regular season but struggled down the stretch. Jose Urquidy got some starts but is unproven. In the ALCS, Houston went with a bullpen game with Urquidy getting a few innings along with Brad Peacock. The Houston bullpen is deep enough to get away with that, but if you’re looking for an edge for Washington, this could be it.

The Nationals, despite being huge underdogs, can matchup well enough on offense and may even have a starting rotation advantage when you consider how Sanchez has thrown in this postseason, but the bullpen is a key weakness.

Washington, essentially, has a two-man bullpen with Daniel Hudson and Sean Doolittle. Both have been pitching brilliantly this October and are interchangeable based on matchups in the final few innings, but Dave Martinez has had to go to starters in relief on multiple occasions this postseason because he doesn’t have trust in his relievers.

This approach, of course, can work. We saw starters in relief for the 2018 Boston Red Sox and 2017 Houston Astros, both of whom won the World Series, but it certainly makes it more of a challenge.

Outside of Hudson and Doolittle, Fernando Rodney and Tanner Rainey are options in lower-leverage situations. Hunter Strickland and Wander Suero are the only other two relievers to get into a game in the playoffs and neither looked good.

The long layoff before the World Series may have helped freshen up Dolittle and Hudson, but we’ve barley seen anyone else this October which isn’t likely a good thing.

On the Astros’ side, they used a bullpen game to win the deciding Game 6 of the ALCS against the Yankees and have plenty of bullpen depth, a luxury they didn’t enjoy when they won it all a couple years ago.

Roberto Osuna is an elite closer while Will Harris, Joe Smith and Josh James have been very good in October. Ryan Pressly is an All-Star set up man, but has shown some issues in the playoffs, but even with him and Hector Rondon stumbling, Houston has a ton of options, including staters-turned-relievers Brad Peacock and Jose Urquidy.

Nothing illustrates the disparity here quite as much as looking at each team’s bullpen ERA in the regular season with Houston at 3.75 and Washington dead last in baseball at 5.66. This postseason, Washington’s bullpen ERA has been 4.76 with some help from the rotation, but Houston’s is still better at 4.08.

What’s your best bet for this game? ?

The Nationals could steal a couple games on the strength of their rotation. Look for the rotation to slow the Houston bats and keep the games close. The Astros may, blow out a game or two late, but Washington should be in each game.

Ultimately, it’s the bullpen that does Washington in—along with sizeable layoff. A team relying on starting pithing and momentum can really get thrown off with a week between games. The rotation arms could be, potentially, too strong causing issues with breaking pitches. Meanwhile, hitters’ timing could be off. While Washington will do all, it can to stay fresh, it’s hard when not in competitive games like Houston was up through Saturday night.

In the end, the starting pitching and offenses make this an interesting series, but the bullpens are just too far apart, and Houston ultimately wins a few games late—like they did with walk offs against the Yankees earlier this postseason—and walk away with the series.