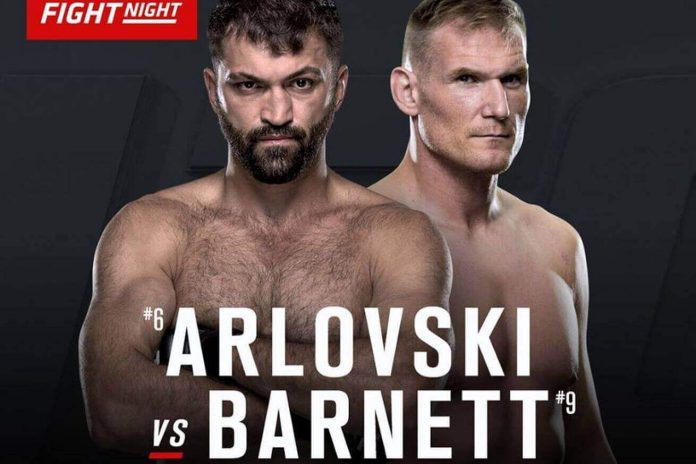 Considering how long former heavyweight champions Andrei Arlovski and Josh Barnett have been in the fight game, it’s surprising that they’ve never met in combat. But these two old-school big men will finally meet as the main event of a UFC Fight Pass card set in Germany this Saturday. It’s a striker vs. wrestler matchup, and the winner gets to keep his name on a short list of title contenders.

Let’s take a look at your UFC betting options, with UFC odds courtesy of BookMaker.eu as of August 30, 2016.

Barnett is currently a slight favorite, with a -150 moneyline. UFC betting lines on Arlovski are at +130, indicating that oddsmakers are expecting more action to come in Barnett. The over/under for this five-rounder is a low 1.5 rounds, although the over is the chalk at -150. Heavyweight battles usually don’t last long, as both men have only been to decision once in their last 11 combined fights.

Arlovski comes into the bout with consecutive losses, effectively ending any momentum he had garnered from a six-fight winning streak that had him creeping into title contention. Granted, those defeats came against Stipe Miocic – the current champ – and Alistair Overeem, who will be challenging Miocic at UFC 203.

Arlovski has always been a good striker with knockout power, and he has become much more refined since he started training at Jackson-Wink. The Belarusian still relies heavily on crisp boxing, but has given up the aggressive tendencies that expose his vulnerable chin.

Josh Barnett Is No Knockout Artist

The glass chin that plagued “The Pit Bull” has resurfaced, but luckily for him, Barnett has never been much of a knockout artist. The former Pride champion is an old school catch wrestler who is at his best when he’s on top pounding away and gunning for submissions. It’s a grinding, brutal fight style, but one that’s kept him near the top of the world rankings for nearly two decades.

This is a simple breakdown: If Arlovski can keep the fight standing, he should come out on top. But Barnett can be relentless when he’s hunting for takedowns, which means Andrei is going to spend a lot of time pressed up against the cage searching for underhooks. Arlvoski has to avoid the takedowns at all costs and keep The Warmaster at the end of his punches.

Betting on heavyweights to win is always a dicey proposition. Arlovski has the power to knock out anyone on the roster, but I have more faith in Barnett’s experience and wrestling. The Warmaster is durable enough to eat Arlovski’s best shots and crafty enough to take this fight to the ground.

For my money, the over on 1.5 rounds seems to be the best bet. There’s no way that Barnett doesn’t try grappling from the onset, which means there should be plenty of clinchwork early on. That kind of fighting eats up clock fast. Because Barnett isn’t the type of one-punch knockout artist that bullrush Arlovski, this match should easily surpass 7.5 minutes.