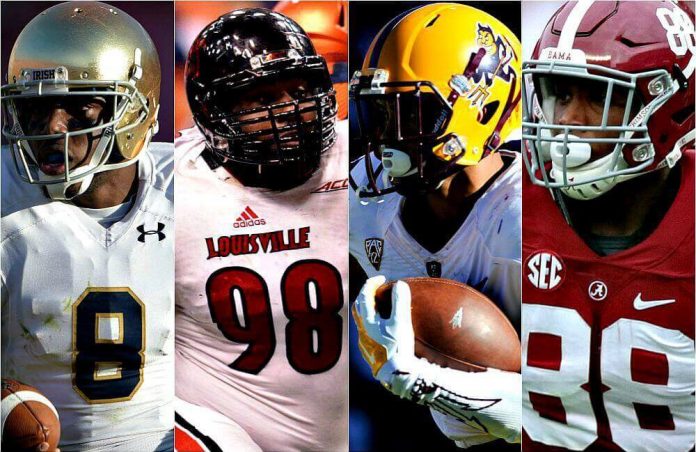 We might still be six weeks away from the start of the 2016 regular season, but it’s never too early to look at college football. The Week 1 odds were posted last Friday, and there are some interesting numbers on the board, to say the least.

The first thing that should jump off the page to bettors is that Hawaii is on this list twice. The Warriors are kicking off the season against Cal in Sydney, and they’re turning around eight days later to play in Ann Arbor against a very good Michigan team that is going to be much improved in the second year of the Jim Harbaugh era.

That’s why the Wolverines are the biggest favorites on the Week 1 odds board at -41.

Though there’s no doubt as to who is going to win that game at the Big House, there are some tremendous games to kick off the 2016 NCAA campaign.

Gus Malzahn had a tough season at Auburn last year when the Tigers were expected to be SEC West contenders. They did go 5-0 outside of conference play, and they could be of great value here against the defending ACC champs and the national runners-up.

Clemson should once again be a viable title contender, but is it a given it’s going to go to Jordan Hare and win this game? We don’t think so.

Alabama typically dominates games like this one, but this time around, it has a duel against a team that has at least as much NFL-ready talent on the field as it does.

The Trojans can play for sure, and they’re going to have to find a quarterback to replace Cody Kessler. If USC can win this game, the Tide might find themselves in a bit of trouble. This is a big spread for a neutral site game between two very talented teams.

One of the two games on the board in Week 1 of the college football season that opened up at a pick ’em. The Fighting Irish went 10-3 last season, and they began things whipping Texas at South Bend 38-3.

However, things really turned around for the men in burnt orange in the second half of last season. Charlie Strong’s men still hit speed bumps against Iowa State and Texas Tech at the end of the year, but they also beat Baylor in Waco to bring a heck of a lot of momentum into the offseason.

What better way to announce a re-arrival to the mainstream college football scene than to get some payback on the Golden Domers?

Though this is technically a home game for the Seminoles, it’s actually being played in Orlando instead of Tallahassee. It’s a big game for Jimbo Fisher to prove that his squad is over last year’s embarrassment in the Peach Bowl against Houston.

Chad Kelly had a fantastic year for Ole Miss last season, including going on the road and beating Alabama. This is a massive challenge, though. Florida State only graduated one starter from a team which finished with 10 wins, and if Fisher can figure out the quarterback situation, one which is muddled with Sean Maguire, true freshman Malik Henry and a few others, the Garnet and Gold could challenge Clemson in 2016 for the ACC crown.

This first game against Ole Miss isn’t necessarily a playoff eliminator, but it’s a big day for the ACC. FSU and Clemson should both be winners, and if they aren’t, you can almost certainly bank on two SEC teams being positioned to reach the playoff.