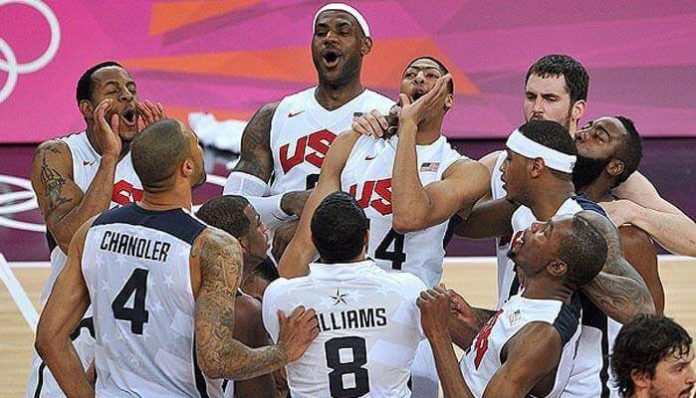 History of basketball in the Olympics suggests that the United States is set to dominate. In fact, BookMaker.eu recently released odds on whether the Stars and Stripes would or would not win gold medals in the 2016 Olympics.

The men are favored by a healthy -1000 margin to do so while the women are lined at -1250. Can anyone tame the Americans on the hardcourt in Rio 2016?

The athletes available for the United States men’s team is just off the charts. Even if LeBron James doesn’t end up playing as he’s threatening to do, the glut of players Mike Krzyzewski has available to him is insane.

Sure, the Americans were toppled in 2004 and had to settle for bronze medals, but this is a team that went 8-0 in the Olympics four years ago and averaged beating its foes by 32 points per game. The Americans only trailed once in the fourth quarter of the eight games.

It almost doesn’t matter who the United States sends out there; that basketball team is going to be incredibly dominant just as we saw at the FIBA World Cup two years ago. That team featured Stephen Curry, Klay Thompson, Derrick Rose and Kyrie Irving all sharing the backcourt together. It worked then, and it will surely work now.

La Roja have been the biggest pain in the backside to the United States over the years, and for good reason. Pau Gasol is running out of time at a high level, but there’s other legit NBA talent here.

Marc Gasol, Rudy Fernandez and Nikola Mirotic are all incredibly gifted players who can stretch the floor against the Americans, and that alone could cause problems. If you look at recent Olympics basketball history, you’ll see that the Spanish team has finished second to the Americans in each of the last two events.

The window of opportunity has probably closed on Argentina at this point. Luis Scola, Pablo Prigioni and Manu Ginobili are flat out very old now at 35, 38 and 38 years old, respectively. Sure, the Argentines won the gold medals in 2004, but since then, results have steadily been declining.

They finished third in 2008 and fourth in 2012. This could be the year where the team falls flat and finishes well off the pace, but there should be a bit of home court advantage here playing on South American soil, and you never know when some of that Manu magic will emerge.

Let’s just put it this way…the Stars and Stripes could send out the UConn women’s basketball team and probably win the Olympic gold medals going away. Forget about the WNBA.

If you thought the amount of awesome players on the men’s side was huge, just check out what the women bring to the table. Since 1984, the Americans have won all but one of the gold medals in that span. The exception was in 1992 when Russia shocked the world to grab the gold.

Not surprisingly, Spain again appears on this list of teams to watch. The Spanish ladies took silver at the 2012 Olympics, and they also finished second to the United States in the FIBA World Championships two years ago.

Granted, Spain really hasn’t come all that close to beating the Americans in any of these matches, but most haven’t come close to beating Spain either. Interestingly enough, there isn’t a single WNBA player on the Spanish national team, but that doesn’t make this young squad any less dangerous.

This really is just a matter of having some serious home court advantage. The Brazilian women are quietly ranked No. 7 according to the FIBA World Rankings. That doesn’t mean they’ve got a shot at winning gold medals, but getting to the Third Place Game seems to be a realistic goal.

Three WNBA stars, Damiris Dantas, Nadia Colhado and Erika de Souza are the ladies to watch on this team, though it should be noted that much of the rest of this roster has been playing together at Brazilian club Sao Jose for years and years building chemistry for moments like this.

All of the basketball matches of the 2016 Summer Olympics will be shown on the NBC family of networks. Coverage of the Olympics begins Friday, August 5, and runs through Sunday, August 21. The basketball tournaments encompass the entire fortnight before medals are handed out the last weekend of the Olympic Games.